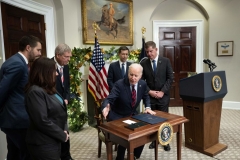 President Joe Biden (R) leaves after signing a resolution to avert a nationwide rail shutdown, in the Roosevelt Room of the White House in Washington, DC, on December 2, 2022. (Photo by BRENDAN SMIALOWSKI/AFP via Getty Images)

(CNSNews.com) - President Biden on Friday signed a bill that averts a railroad strike, something that he said would have been catastrophic to the U.S. economy.

“The bill I’m about to sign ends a difficult rail dispute and helps our nation avoid what, without a doubt, would have been an economic catastrophe at a very bad time in the calendar. Our nation’s rail system is literally the backbone of our supply chain, as you all well know, and so much of what we rely on is delivered on our rail, from clean water to food and gas and every — every other good,” he said at a signing ceremony at the White House.

“A rail shutdown would have devastated our economy. Without freight rail, many of the U.S. industries would literally shut down. In the event of a shutdown, my economic advisors report that as many as 765,000 Americans, many of them union members themselves, would have been put out of work for the first time and — excuse me, within the first two weeks of this — of the strike alone,” Biden said.

“Communities could have lost access to chemicals necessary to ensure clean drinking water.  Farms and ranches across the country would have been unable to feed their livestock, and thanks to the bill Congress passed and what I’m about to sign, we’ve spared the country that catastrophe,” the president said.

The bill that the president signed gives workers “a historic 24 percent wage increase over the next five years, improved working conditions, and peace of mind around their healthcare.”

Biden acknowledged that the bill doesn’t include paid sick leave, but he promised to continue to fight for it “until we succeed.”

“And, look, I know this bill doesn’t have paid sick leave that these rail workers and, frankly, every worker in America deserves, but that fight isn’t over. I didn’t commit we were going to stop just because of — we couldn’t get it in this bill, that we were going to stop fighting for it. I’ve supported paid sick leave for a long time, and I’m going to continue that fight until we succeed,” he said.

The president thanked both sides in Congress “for acting so quickly.”

“I know this was a tough vote for members of both parties. It was a tough — for me, but it was the right thing to do at the moment to save jobs, to protect millions of working families from harm and disruption, and to keep supply chains stable around the holidays, and to continue the progress we’ve made and we’re — continue to see on the economy,” he said.

When asked how soon railroad workers will see paid sick leave, Biden said, “As soon as I can convince our Republicans to see the light.”