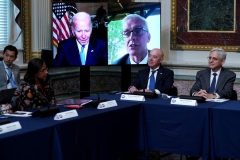 (CNSNews.com) - President Joe Biden signed an executive order on Wednesday to allow Medicaid to help women get abortions out of state if they live in a state that has banned abortion.

“You know, I created this task force by executive order last month and — to ensure that every part of the federal government does its part at this critical moment where women’s health and lives are on the line amidst chaos and uncertainty unleashed by this decision,” Biden said, speaking virtually at the first interagency task force on reproductive healthcare access.

“Emergency medical care being denied to women experiencing miscarriages. Doctors uncertain about what they can do to provide for their patients. Pharmacists unsure whether they can fill prescriptions that they’ve always filled before. A tragic cases of rape survivors, including a 10-year-old girl forced to travel to another state for care,” he said.

“You know, and wiping out the right to choose on — whether you have incest, abortion — I mean, excuse me, incest or having a rape or — I mean, it just — this is just extreme.  You know, even the life of the mother is in question in some case — in some states,” the president said.

“Republicans in Congress and their extreme MAGA ideology are determined to go even further, talking about nationwide bans that would outlaw abortion in every state, under every circumstance, going after the broader right to privacy as well, but as I’ve said before, this fight is not over, and we saw that last night in Kansas,” Biden said.

Kansas voters rejected a referendum on Tuesday that would have banned abortion in the state.

Biden said that the Supreme Court in its opinion on the Dobbs v. Jackson Women’s Health Organization, “practically dared the women in this country to go to the ballot box and restore the right to choose that the court had just ripped away after 50 years.”

“And as I said last night — last month, I don’t think the court has — has any notion, for that matter — or the Republican Party, for that matter — to decide that -– how -– how far to press their extreme agenda and how women are going to respond. They don’t have a clue about the power of American women,” he said.

“In a decisive vote, in a decisive victory, voters made it clear that politicians should not interfere with the fundamental rights of women, and the voters of Kansas sent a powerful signal that this fall, the American people will vote to preserve and protect their right and refuse to let them be ripped away by politicians, and my administration has their back,” Biden said.