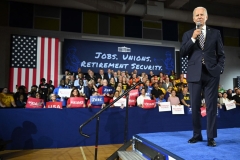 According to a White House fact sheet, it will be the “most significant effort to protect the solvency of the multiemployer pension system in almost 50 years.”

“People around the country wake up every day whether they’ve saved enough to provide for their selves and their family before they stop working, working a job that provides basic dignity, a good middle class job you can raise a family on, a job that provides a dignified retirement and will give you peace of mind,” Biden said.

“Think of all the people and many of you went to bed at night, put your head in the pillow and saying, ‘Am I gonna be alright? Is my family going to be alright?’” the president said.

“Unfortunately, this happens to people need it most, working people in this country. A lot of politicians say they’re going to do something about it. Well we’ve done something about it, and I kept a promise,” Biden said.

“I campaigned to restore the backbone of this country – the middle class and unions because I know this. The middle class built America, and unions built the middle class. I’m keeping the promise, one of the most significant achievements union workers and retirees for over 50 years, and that’s not hyperbole. For years and years, union workers have been driving trucks from factory to stores, bagging your groceries, constructing the buildings, bridges, roads we need and so much more,” he said.

“They’re ironworkers, bricklayers, carpenters, laborers, plumbers, truck drivers, musicians I might add, food workers and so much more. With each paycheck you earn, their employers put money into their pension plans. These workers work hard today to secure retirement for tomorrow. That’s what it’s all about,” Biden said.

“Now, a lot of businesses aren’t willing or able to run their own pension plans. In some industries, workers are employed by several different employers over the course of a year or longer. For example, we see that in transportation, construction, and entertainment, so working with the union that represents the employee businesses in the same industry often come together to form what’s called a multiemployer union,” the president said.

“To make sure these pensions are managed responsibly and to protect the participating workers and retirees, the federal government oversees that ensures the plans. We’ve seen the risk that millions of workers face as they watch their hard-earned pensions turn into broken promises,” he said, asking people to imagine losing 60 percent of their pensions.

The White House called it “the most substantial policy to strengthen the solvency of our nation’s multiemployer pensions since the enactment of the Employee Retirement Income Security Act (ERISA) in 1974.”

The American Rescue Plan will protect the pensions of millions of workers who face cuts and will ensure there are no cuts to earned benefits through at least 2051.
More than 80,000 workers and retirees in Multiemployer Pension Reform Act plans whose benefits were cut through no fault of their own are now eligible to have those benefits fully reinstated with their plans being solvent through 2051.