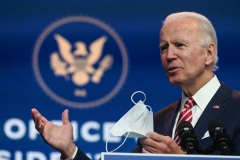 President-elect Joe Biden answers questions from the press at The Queen in Wilmington, Delaware on November 16, 2020. (Photo by ROBERTO SCHMIDT/AFP via Getty Images)

(CNSNews.com) – When asked what he would do immediately to address the long-term unemployment facing the nation, former Vice President Joe Biden said Monday that he would pass the Heroes Act, and he accused President Donald Trump of “still playing golf” and doing nothing to get a deal.

At a press conference in Wilmington, Del., a reporter asked, “Your plan that you've outlined just now about a million union jobs, clean energy jobs, investment in HBCUs, those are things that take time. We have a problem with long-term unemployment that's growing fast right now. What would you do right away specifically to address jobs that may not return for months, may not return ever including in communities of color?”

“What I would do, I would pass the Heroes Act. It has all the money and capacity to take care of each of those things. Now, now, not tomorrow, now. The idea that the president is still playing golf and not doing anything about it is beyond my comprehension. You’d at least think he’d want to go off on a positive note, but what is he doing? And there's virtually no discussion,” Biden said.

“The Republicans, we are told … that there's 22 Republicans who say they won’t vote for anything. There ought to be at least a dozen of them that have the courage to stand up and save lives and jobs. Now,” the former vice president said.

“We should be doing it now, keeping those businesses open, providing the PPE, the protective equipment as well as the PPP, the money that we allow people to get funding to keep their businesses open, everything from separation to testing to a whole range of things that would allow businesses to open and stay open. That's what the plan was at the beginning,” he said.

“If you notice in the very beginning when you passed the stimulus program, the first two pieces, what happened? Businesses were staying open. When they weren't open, they were still able to, people were able to get paid, but look where they are now,” Biden said.

“People are running out of unemployment insurance. What are they going to do? Twenty million people are on the verge of losing your home because they can't make the mortgage payments. You have a larger number being kicked out, that will be kicked out in the street because they can't pay their rent,” he said.

“By the way, it's not just the renter, it's the outfit that owns the building. A lot of them aren’t multimillionaires. They’re running small operations. How can they do it? This is about keeping Americans afloat. Get them through this pandemic, get them through – where their businesses are able to come back. The money’s there. The money is there,” Biden added.