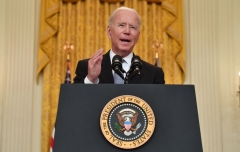 President Joe Biden delivers remarks on the COVID-19 response and the vaccination in the East Room at the White House in Washington, DC on May 17, 2021. (Photo by NICHOLAS KAMM/AFP via Getty Images)

(CNSNews.com) – President Joe Biden announced Monday that the United States will share at least 20 million vaccine doses of Pfizer, Modern, and Johnson & Johnson with the rest of the world once the U.S. has enough doses to protect everyone in the nation.

The U.S. shared over 4 million doses of AstraZeneca vaccine with Canada and Mexico in March. The vaccine is not yet authorized for use in the U.S. In April, it was announced that another 60 million doses will be sent overseas.

“Remember, this is a vaccine that is not authorized for use in the United States yet, so we're going to be sending it to folks once the FDA has reviewed this and said it safe. This is all the AstraZeneca vaccine produced in the United States will be sent out of the country,” the president said.

“Today I’m announcing we will also share U.S. authorized vaccine doses of Pfizer and Moderna and Johnson and Johnson as they become available with the rest of the world as well. These are vaccinations and vaccines that are authorized to be put in the arms of Americans and by the end of June, when we will have taken delivery of enough such vaccines to protect everyone in the United States, the United States will share at least 20 million of those doses, that extra supply with other countries,” he said.

“This means over the next six weeks, the United States of America will send 80 million doses overseas. That represents 13 percent of the vaccine produced by the United States by the end of June. This will be more vaccines than any country has actually shared to date, five times more than any other country, more than Russia, China, which had donated 50 million doses,” Biden said.

“There is a lot of talk about Russia and China influencing the world of vaccines. We want to lead the world with our values come out with this demonstration of our innovation and ingenuity and the fundamental decency and American people. Just as in World War II, America was the arsenal of democracy. In the battle against COVID-19 pandemic, our nation is going to be the arsenal of vaccines for the rest of the world,” he said.

The president said that the U.S. will not use the vaccines to secure favors from other countries. The U.S. will work with the international organization COVAX to ensure the vaccines are delivered in an equitable way “that follows the science and the public health data,” he said.

“In the weeks ahead, working with the world democracies, we will coordinate a multilateral effort to end this pandemic. I expect to announce progress in this area at the G7 summit in the United Kingdom in June which I plan on attending. This unique moment in history requires America leadership,” Biden said.

“Beating the pandemic globally is beyond the capacity of any one nation, even the United States,” the president said.

The U.S. will continue to donate any excess supply as it is delivered, “but that won't be nearly enough,” he said. The U.S. must “lead an entirely new effort” where pharmaceutical companies and partner nations “vastly increase the supply.”

Biden also said this is the first time since the pandemic started that COVID cases are down in all 50 states. COVID deaths are also down 81 percent, he said.

“Some businesses may want to continue to require wearing masks. Let's all be kind and respectful of one another as we come out of this pandemic and respect those who want to continue to wear a mask even if they've been vaccinated. Above all, let's work together to meet the target I've set of 70 percent of adults, all adults with at least one shot by July 4. Seven states have already done this,” Biden said.