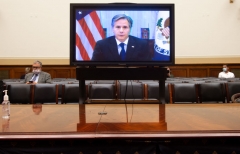 Secretary of State Antony Blinken appears on a television screen as he testifies virtually on the US withdrawal from Afghanistan during a House Foreign Affairs Committee hearing on Capitol Hill in Washington, DC, September 13, 2021. (Photo by SAUL LOEB/AFP via Getty Images)

(CNSNews.com) – “Even the most pessimistic assessments did not predict that government forces in Kabul would collapse while U.S. forces remained,” Secretary of State Antony Blinken testified to Congress on Monday.

During a House Foreign Affairs Committee hearing on the Afghanistan withdrawal, Blinken said that as Gen. Mark Milley, chairman of the Joint Chiefs of Staff, “has said, nothing I or anyone else saw indicated a collapse of this army and this government in 11 days.”

Blinken said that when President Joe Biden took office in January, “he inherited an agreement” that former President Donald Trump reached with the Taliban to remove all remaining U.S. forces from Afghanistan by May 1.

As part of that agreement, the previous administration pressed the Afghan government to release 5,000 Taliban prisoners, including some top war commanders. Meanwhile, it reduced our own force presence to 2,500 troops. In return, the Taliban agreed to stop attacking U.S. and partner forces and to refrain from threatening Afghanistan's major cities, but the Taliban continued their relentless March on remote outposts, on checkpoints, on villages, on districts, as well as the major roads connecting them.

By January 2021, the Taliban was in the strongest military position it had been in since 9/11. And we had the smallest number of troops on the ground since 2001. As a result, upon taking office, President Biden immediately faced the choice between ending the war or escalating it.
Had he not followed through on his predecessor's commitment, attacks on our forces and those of our allies would have resumed and the Taliban's nationwide assaults on Afghanistan's major cities would have commenced. That would have required sending substantially more U.S. forces into Afghanistan to defend themselves and prevent a Taliban takeover, taking casualties and with, at best, the prospect of restoring a stalemate and remaining stuck in Afghanistan under fire indefinitely.

There's no evidence that staying longer would have made the Afghan security forces or the Afghan government any more resilient or self-sustaining. If 20 years and hundreds of billions of dollars in support, equipment, and training did not suffice, why would another year? Another five? Another 10?

Blinken said that U.S. adversaries – China, Russia, Iran, and North Korea, would have liked nothing more than for the U.S. “to re-up a 20-year war and remain bogged down in Afghanistan for another decade.”

“In advance of the president's decision, I was in constant contact with our allies and partners to hear their views and factor them into our thinking. When the president announced the withdrawal, NATO immediately and unanimously embraced it,” he said, adding that everyone was “intensely focused on the safety of Americans in Afghanistan.”

The secretary said the U.S. began urging Americans to leave Afghanistan in March, sending “19 specific messages with that warning and with offers to help, including financial assistance to pay for plane tickets” between March and August. He also said that the Trump administration hadn’t even begun processing special immigrant visa (SIV) applicants dating back to March 2020.

Despite this effort, at the time the evacuation began, there were still thousands of American citizens in Afghanistan, almost all of whom we evacuated by August 31st. Many were dual citizens living in Afghanistan for years, decades, generations. Deciding whether or not to leave the place they know as home was an incredibly wrenching decision. In April, we began drawing down our embassy, ordering nonessential personnel to depart.

We also used this time to significantly speed up the processing of the special immigrant Visas for Afghans who had worked for us and by our side these past 20 years. When we took office, we inherited a program with a 14-step process based on a statutory framework enacted by congress and involving multiple government agencies and a backlog of more than 17,000 SIV applicants.

There had not been a single interview in the SIV program in Kabul for nine months, going back to March of 2020. The program was basically in a stall. Within two weeks of taking office, we restarted the SIV interview process in Kabul. On February 4th, one of the very first executive orders issued by president Biden directed us to immediately review the SIV program to identify causes of undue delay and to find ways to process SIV applications more quickly.

This spring, I directed significant additional resources to the program, expanding the team in Washington of people processing applications from 10 to 50 and doubling the number of SIV adjudicators at our embassy in Kabul.

Even as many embassy personnel returned to the United States under ordered departure, we sent more consular officers to Kabul to process SIV applications. As a result of these and other steps, including working with Congress, by May, we had reduced the average processing time for special immigrant Visas by more than a year.

Even amid a COVID surge at Embassy Kabul in June, we continued to issue visas and we went from issuing about 100 special immigrant visas per week in March to more than 1,000 per week in August when our evacuation and relocation efforts began. That emergency evacuation was sparked by the collapse of the Afghan security forces and government.

Throughout the year, we were constantly assessing their staying power and considering multiple scenarios.

The secretary said that despite Kabul falling to Taliban forces so quickly, the Biden administration “planned and exercised a wide range of contingencies.”

Because of that planning, we were able to draw down our embassy and move our remaining personnel to the airport within 48 hours and the military placed on standby by President Biden was able to secure the airport and start the evacuation within 72 hours. The evacuation itself was an extraordinary effort under the most difficult conditions imaginable by our diplomats, by our military, by our intelligence professionals.

They worked around the clock to get American citizens, Afghans who helped us, citizens of our allies and partners, and at-risk Afghans on planes, out of the country, and off to the United States or to transit locations that our diplomats had arranged and negotiated in multiple countries. Our consular team worked 24/7 to reach out to Americans who could still be in the country, making in those couple of weeks 55,000 phone calls, sending 33,000 emails, and they’re still at it.