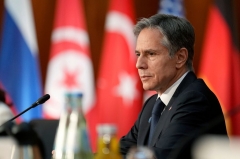 (CNSNews.com) - Secretary of State Antony Blinken said Monday that he did not block any American citizens from leaving Afghanistan, and Afghan refugees who left Afghanistan are tested for COVID-19 and vaccinated before resettling in the United States.

During a House Foreign Affairs Committee hearing, Rep. Scott Perry (R-Pa.) asked Blinken about whether the State Department blocked Americans from leaving Afghanistan and whether Afghan refugees have been vaccinated against COVID before entering the U.S.

PERRY: Did State at any point in the evacuation process block American citizens from leaving Afghanistan?

BLINKEN: No, we did not.

PERRY: None. Your testimony before Congress is, is that State didn’t block any American citizens leaving Afghanistan?

BLINKEN: To the contrary, my officers, men and women ran into the building from around the world to help Americans get out, and—

PERRY: It’s a simple yes or no. You had to do it for Mr. Connolly. You can do it with me. Yes or no? I just want to clarify. You didn’t block anybody. State didn’t block any American citizens?

BLINKEN: No, we were there to help Americans get out.

BLINKEN: We’re in the process of going through---

BLINKEN: We will have--- by the end of the month, we will have brought a total of approximately 60,000

PERRY: That have not met the SIV process?

BLINKEN: Some of those will have been through the SIV process. All of them regardless of SIV status will have gone through rigorous security checks, first at the transit points outside of the United States and then in the United States.

PERRY: Vaccinated before they leave?

PERRY: All right thank you, Mr. Secretary. Is it the policy of the United States to take hard-earned tax dollars and pay terrorist organizations?

BLINKEN: It is not.

PERRY: It is not. So your testimony earlier was, is that we’re sending taxpayer dollars to Afghanistan right now for humanitarian relief. Who are we sending that to?

BLINKEN: To NGOs and to United Nations agencies who are using that assistance, not to the Afghan government.

BLINKEN: As we do around the world in places of conflict where we provide humanitarian assistance, working through UN, working through NGOs with long-tested methods to make sure that the assistance provided goes to the people who need it, not to the government in question.

PERRY: Is it your understanding that over the past 20 years the United States taxpayers have paid Pakistan, who has then used the money to support the Taliban, the Haqqani network, ISIS-K, Khorasan group, et cetera for the past 20 years? Is that not true?

BLINKEN: There's a long history that we should all look at together about the involvement of Pakistan.

PERRY: I would say we should no longer pay Pakistan and we should pay India.