Boehner: ‘I’d Rather Set Myself on Fire Than to Run for Office Again’ 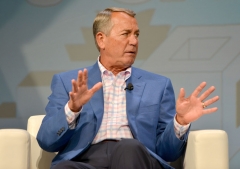 John Boehner speaks onstage at Convergence Keynote: Kevin Murphy and John Boehner during the 2019 SXSW Conference and Festivals at Hilton Austin on March 15, 2019 in Austin, Texas. (Photo by Nicola Gell/Getty Images for SXSW)

(CNSNews.com) – Former House Speaker John Boehner told NBC’s “Meet the Press” on Sunday that he’d rather set himself on fire than run for office again. Then he cursed at host Chuck Todd.

“I'd rather set myself on fire than to run for office again,” Boehner said.

“You know, the only reason I asked that question is because I expected an answer just like that,” Todd said at the end of the interview.

Todd asked if Boehner held himself responsible for the Republican Party lurching to the right in the last 10 years.

“Well, Chuck, every day that I saw this, beginning in 2011, I pushed back on it. I did everything I could to bring all these members into the Republican Party, into our team, but some of them just didn't want to come,” the former speaker said.

“Most of those so-called Tea Party types, frankly, became very good Republicans, and on any given day, I had 210, 215 solid Republican votes, but on any given day I had two or three dozen of what I call ‘knuckleheads’ who wanted chaos, who wanted it 100 percent their way or no way, but every single day, in the five years that I was speaker, I tried to work to bring them into the party. Some just wouldn't come,” he said.

When asked how white supremacy got mainstreamed into the GOP, Boehner said, “Well, Chuck, I have no idea how this even showed up. I wouldn't call it mainstreamed in our party, but I can tell you that this so-called America First Caucus is one of the nuttiest things I've ever seen.

“Listen, America is a land of immigration. We've been the world's giant melting pot for 250 years, and we ought to celebrate the fact that we are this giant melting pot, and to see some members of Congress go off and start this America First Caucus is -- it's the silliest thing I've ever seen, and Republicans need to denounce it,” he said.

“I think it's awfully cruel, and frankly it has no place in the Republican Party. You know, my second-biggest regret during my time as speaker is not being able to come to an agreement with President Obama on an immigration reform bill. Our immigration system is a mess. It's broken from top to bottom, and it needs to be fixed so that it's fairer for Americans who are here and fairer for those who are trying to come here,” Boehner said.

Todd asked if was really former Fox News Chairman Roger Ailes “and the radicalization of what happened on sort of right wing at night that torpedoed immigration.”

“No, no. Believe me, Chuck, I wanted to get immigration reform done. President Obama wanted to get it done, but again, every time we'd get ready to move, the president would go out and give some speech or he'd loosen up some, some immigration regulation and just kind of set everybody on fire, and that's not a prescription for getting things accomplished in the Congress,” Boehner said.

When asked whether he regrets voting for former President Donald Trump’s re-election after seeing what happened during the Capitol Hill riot, the former speaker said, “Well, listen, I cast the vote. It was over, and it was done with. I was disappointed in what happened after the election, the president continuing to make claims about the election being stolen, and I kept looking for evidence, like most Americans did.

“Where's the evidence? How can you keep saying something that -- without providing any proof? And there wasn't any, and clearly on January 6th, it was one of the saddest days in my life, watching the place I have worked -- watching a place where I and my team did everything we could for that institution -- being trashed by a mob,” Boehner said.

When asked whether Trump’s actions make it so that he has forfeited the ability to lead the country, Boehner said, “Listen, Chuck, I'm not in office any more. What he does or doesn't do really is of no interest to me.