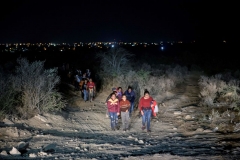 In a photo taken on March 27, 2021 immigrants, who arrived illegally across the Rio Grande river from Mexico, make their way along a track towards a processing checkpoint set up by border patrol agents in the border city of Roma. (Photo by ED JONES/AFP via Getty Images

“I was asked last night who is controlling the border? Is it President Biden? Is it Kamala Harris, who is it? And my answer was, it’s the cartels. The cartels control the borders now. It’s not even the Border Patrol. It’s not even the U.S. government,” Judd told Fox News’s “America’s Newsroom.”

Judd said that despite DHS Secretary Alejandro Mayorkas visiting the border on Thursday, there’s “no sign” of a change that could stem the surge.

“So we do need to have the people that are making these decisions come down to the border, see exactly what is going on so that hopefully they will go back and say we messed up, we need to go back to what we were doing that solved this issue, that dropped us to 45-year lows in illegal immigration and then we can get a handle on this and go after the cartels and drug smugglers and go after those things that are dangerous to the American public,” Judd said.

Judd found it “upsetting” that some think the fact that there are so many arrests at the border and so many children in U.S. custody that it shows that border security is working and the Border Patrol have all they need.

“We want to protect the American public, but when we get flooded with unaccompanied children, and when we get flooded with family units, it pulls our resources out of the field, and it creates artificial gaps, which allows the cartels to generate billions of dollars of profit, and they’re generating that profit off of our policies, and that should upset every single American,” Judd said.

Judd said that if the Biden administration did what he suggested to stop the surge at the border, the change will be “almost immediate.”

“It’s like a light switch. Once people understand that they’re not going to get released into the United States after they cross our borders illegally, they stop coming, but if they know that all they have to do is make an illegal entry and they’re just going to get released to Des Moines, Iowa, Chicago, Illinois, Miami, Florida, if they know that they're going to be released, they're going to continue to come,” he said.

“That's that magnet that was reintroduced when President Biden rescinded the Migrant Protection Protocols. We’ve got to back to what is working, and if we do that, it's just like a light switch,” Judd added.

He said that migrant children are kept in “deplorable conditions, and it makes me sick that under the Trump administration, there were politicians that were yelling and screaming about kids in cages, yet we're putting these kids in the same exact facilities, and it’s mum.

“They don't say anything. That lets you know that this is politics. it doesn't matter how these kids are -- what the condition these kids are under. It's politics, and that's disgusting,” Judd said.

When asked what it says about the priorities of the Biden administration, Judd said, “It says that there’s no priorities as far as border security goes.”