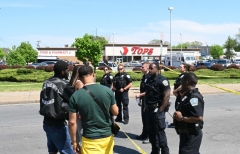 Police and mourners gather near a Tops Grocery store in Buffalo, New York, on May 15, 2022. (Photo by USMAN KHAN/AFP via Getty Images)

(CNSNews.com) - The mayor of Buffalo, N.Y., Byron Brown, is calling for “sensible gun control” and cracking down on “hateful ideology” on social media in the wake of the mass shooting at a grocery store that claimed the lives of 10 people and injured three others.

When asked whether there is an ongoing threat in his city, Brown told CBS’s “Face the Nation” on Sunday, “I think the question that we need to ask ourselves: are any residents safe in this country anywhere? We have to focus on sensible gun control.

“That said, after all of these mass shootings that have taken place in this country for different reasons, year in and year out, month in and month out, week in and week out, let Buffalo, New York, be the last place that this kind of mass shooting happens,” the mayor said.

“So we have to put more pressure on lawmakers in Washington, those that have been obstructionists, to sensible gun control, to reforming the way guns are allowed to proliferate and fall into the wrong hands in this country. So – whether it is urban, suburban, rural, no community seemingly is safe from these mass shootings,” he said.

“It's not just Buffalo, New York. It's communities in every corner of this country that are unsafe with guns and with the hateful ideology that has been allowed to proliferate on social media and the Internet. That has to be reined in. That has to be stopped. It's not free speech. It's not American speech. It's hate speech, and it must be ended,” Brown said.

The mayor said that Buffalo is “a resilient community” that “has been through a lot” and went through “a renaissance” prior to the pandemic.

“We're a mid-size American city of over 278,000 people, and this part of the city, 80% African-American but diverse with people of many different backgrounds living in this community,” he said.

“We are certainly saddened that someone drove from hundreds of miles away, someone not from this community that did not know this community that came here to take as many Black lives as possible, who did this in a willful, premeditated fashion, planning this, but we are a strong community and we will keep moving forward,” the mayor said.

“This is a community that is experiencing development. People have been hoping and waiting for investment and growth and opportunity. We are beginning to see that in this community, in all parts of the city, and we won't let that progress stop. We won't let hateful ideology stop the progress that we are seeing and experiencing in the city of Buffalo,” Brown said.