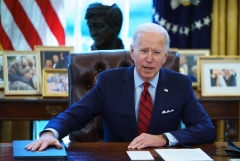 S President Joe Biden speaks before signing executive orders on health care, in the Oval Office of the White House in Washington, DC, on January 28, 2021. - The orders include reopening enrollment in the federal Affordable Care Act. (Photo by MANDEL NGAN/AFP via Getty Images)

(CNSNews.com) - Former New Jersey Gov. Chris Christie urged Republicans on Thursday to call former President Joe Biden out on his lies, like the mainstream media did to President Donald Trump.

“It seems like the rules change. I said this last week. When the Democrats thought that President Trump had said something they thought was false like you were pointing out in the last piece, they would not hesitate for a moment to call him a liar, but somehow now the mainstream media thinks that's something that’s now out-of-bounds when it's on Joe Biden,” Christie said in an interview on Fox News’s “Ingraham Angle.”

“That's not telling the American people the truth, and I'm tired of sitting around watching this double standard. So when Joe Biden doesn’t tell the truth, I'm going to be out there calling him out on it, and what I said to Republicans this week was everyone of us should,” the former governor said.

“That is probably the most poisonous, noxious thing I can think of especially for young minorities who are trying to do their best in these failing schools and go to school and half the time it's on Zoom. Now they have to deal with that lie,” she said.

“That's because despite everything that President Biden said during the campaign about following the science on reopening schools and everything else that we should be following the science. Well when the science shows clearly that schools should be open and children should be in those schools because they are less apt and the teachers are less apt to catch COVID in schools than they are on the outside, but again, as long as the teachers union tells them they don't want to go back to work, we don't need to follow the science,” Christie said.

“You look at this stuff, Laura, and we've got to as a Republican Party call these things out immediately and repeatedly, because if we don't, the American people - who will pay attention sometimes and not pay attention others - are going to miss it and let Joe Biden off the hook for not telling the truth, and I simply am not going to allow that to happen,” he said.

When asked what his message is to Republicans on how to reach out to minorities who are receiving toxic messages on race in schools and on the ground in places like Minnesota and Seattle, Christie said, “The only way for us to confront it is with the truth, and the American people deserve the truth. We need to go to these minority communities and talk to them about the fact that they are as much a part of the American dream as anybody else in this country.

“We got people in public schools - I can say this is happening in New Jersey right now. They’re teaching American dream - truth or myth. They are only giving them materials that back up myth. It's outrageous. This is something that is going on. Republicans have to be the truth squad. The Americans deserve the truth,” the former governor said.

“Joe Biden promised to give it. He's not. He's proven that already inside the first 100 days, and I'm tired of sitting back and giving him the benefit of the doubt on this, because not only hasn't he earned it, he's gone the exact opposite direction. I don't know what Republicans are waiting for, but I'm not going to wait,” he said.

Ingraham asked Christie for his thoughts on the CDC’s messaging on COVID vaccines and in light of falling public confidence on vaccines due to the Johnson & Johnson pause and the Pfizer CEO saying Americans need a third shot to combat the variants.

“My message is that getting the vaccine is like putting on your safety belt. It's not going to guarantee you that if you get in a car accident that you're not going to get hurt or killed, but it's going to make it much, much less likely, and that's what the vaccines will do. I think the Biden administration totally botched the messaging on this, because all they worry about is being politically correct,” Christie said.

“Political correctness is the first priority of the Biden administration or maybe one A, with number one being spending us into oblivion and lying about what they are spending on, but One A is political correctness. At the end of the day, these vaccines have been tested,” he said.

“They’ve been extensively tested, four times more than any other drug the FDA normally approves in this period of time, and they are going to make it better for the American people to go out there and get their lives back completely, not giving it away,” the former governor added.

Ingraham asked about the messaging of Dr. Anthony Fauci, director of the National Allergy and Infectious Diseases, that even with vaccinations, people still need to wear masks.