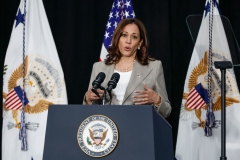 Vice President Kamala Harris speaks about the US Supreme Court's decision to overturn Roe vs. Wade, at YMCA in Plainfield, Illinois, on June 24, 2022. (Photo by KAMIL KRZACZYNSKI/AFP via Getty Images)

“Can the administration expand abortion access or abortion services on federal land, meaning provide the access on federal land that might be in and around states that ban abortion?” Bash asked Harris in an interview on CNN’s “The Lead with Jake Tapper.”

“I think that what is most important right now is that we ensure that the restrictions that the states are trying to put up, that would prohibit a woman from exercising what we still maintain is her right, that we do everything we can to empower women to not only seek but to receive the care where it is available,” Harris said.

“Is federal land one of those options?” Bash asked.

“I mean, it's not right now what we're discussing, but I will say that when I think about what is happening in terms of the states, we have to also recognize, Dana, that we are 130 odd days away from an election, which is going to include Senate races, right? Part of the issue here is that the court is acting,” the vice president said.

“Now Congress needs to act, but we - if you count the votes - don't appear to have the votes in the Senate. There's an election happening in 130-odd days. I’m taking– for example, thinking of a Senate race in Georgia or North Carolina. There's a Senate race coming up just in a couple weeks in Colorado,” Harris said.

“We need to change the balance and have pro-choice legislators who have the power to make decisions about whether this constitutional right will be in law, right? We say codify. Put it in law so that there will be no ambiguity about it,” she added.

When asked whether she thinks the Supreme Court is on the path to reverse protections for same-sex marriage and contraception, Harris said, “I definitely believe this is not over. I do. I think he just said the quiet part out loud, and I think that is why we all must really understand the significance of what just happened.

“This is profound, and the way that this decision has come down has been so driven, I think, by the politics of the issue versus what should be the values that we place on freedom and liberty in our country. Right? The right to privacy. Let's think of this in the context of the laws that are being passed in states,” the vice president said.

“Dana, in 13 states by my count, they will not allow a woman to have access to reproductive health and to an abortion if she is the victim of rape or incest. So let me tell you something,” she said.

“As a former prosecutor who specialized in crimes of violence against women and girls, in particular, child sexual assault and rape, the idea that after a woman has endured such violence to her body that she would not have the freedom and authority to decide whether she wanted to continue with a pregnancy that is a result of an act of violence is absolutely unthinkable,” Harris said.