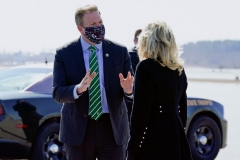 (CNSNews.com) – New Hampshire Gov. Chris Sununu told CNN’s “State of the Union” on Sunday that $1.7 trillion for the president’s Build Back Better Act is “an immense amount of money” that will be paid for by raising taxes.

“It's not about the measures and the policies. Everyone likes those things. They're good things, but this is an immense amount of money, and we don't run a balanced budget in Washington. We sure as heck do here in New Hampshire. Somebody has to pay for all of us this. We have got good programs at the state level that do a lot of these things,” the governor said.

“So, look, more programs and all that sound good, but, at the end of the day, they have to be paid for and they have to be sustainable, because these aren't programs that we're just going to do for a couple of years. This is one-time money, most of it, but it now has to get built into a budget,” Sununu said.

“Washington doesn't seem to understand the concept of a budget, but somebody has to pay this. It's not just you and me. It's our kids and grandkids. So, the fiscal responsibility has left the window out of Washington, D.C., and I think that's a frustration for all Americans,” he said.

CNN host Dana Bash pointed out that the Democrats “say that it is paid for, that they have ways to offset the costs.”

“Yes, it's called taxes,” Sununu said. “So, one thing -- one of the reasons I want to stay as governor is because, as they keep raising taxes on everybody in Washington, D.C., I keep lowering them and Republican governors keep lowering them for their citizens to offset that.

The governor said that “inflation, in itself, is the worst tax you can put on low- and middle- income families across America, because they got to buy a gallon of gas as much as anybody else.”

“And so this idea that this -- we're going to spend $1.75 trillion, but, trust us, it's not going to cost you anything, nobody buys that. The American people are smart. They're voters. They're going to vote with their feet, and if people did buy it, you would see poll numbers changing. You would see this stuff get overwhelming support from the American people, not just from one party or the other,” he said.

“So, overall, you have got to find ways to get to the middle. You don't do that just by cutting a price tag from $3.5 trillion to $1.75 trillion. You do it by looking at what happens at a local level. How do you make sure these programs can get implemented? Remember, the Senate supports a policy,” the governor said.

“They support funding, and then they go under on to the next thing. It's governors and the citizens in local communities that have to implement these programs and that feel the real cost of them,” Sununu said.

Bash pointed out that Sununu has been critical of President Biden’s handling of rising inflation. She asked what Biden should do that he’s not already doing.

“So, a couple things. When you talk -- number one, when you talk about gas and home heating fuels, the fact that he has limited the supply, said we're not going to create more supply here in the United States, well, fuel is a futures market,” the governor said.

“So when all these companies hear that their future supply is going to be diminished here in the U.S., yet the president is asking OPEC to produce more overseas, and he's approving pipelines out of Russia that are more -- or, I should say, less environmentally sound than what we would do here, it doesn't really make much logical sense, and so that has a huge trigger into the market,” Sununu said.

“Home heating fuel is a big deal, not just on the cost, that's bad enough, but the supply chain, making sure we can get the trucks from point A to point B. This coming February, the federal government is going to put in further regulations and further barriers to getting a CDL license, just getting someone a trucking license,” he said.

“That's going to actually have real impact, not just moving products onto a grocery shelf, but actually moving heating fuel where it needs to go. So these are real policies that happened in Washington that we feel every single day in our communities,” the governor said.