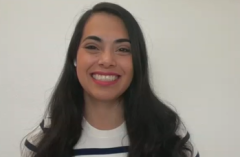 “Well, to be honest with you South Texas has always been conservative. We're all about faith and family, and hard work. That is who we are but The Democrat party took us for granted. They felt entitled to our vote, making the same promised over and over and really not making nothing happen, and I honestly had enough,” Flores said.

Flores said that the main issue of concern to her voters is inflation.

“It is the cost of living. Everyone is extremely pissed off, angry at the Biden administration because of the increase of gasoline, of groceries, of medication. That is hurting them tremendously, not only here in south Texas but in the entire country, and of course the border crisis is something we see here right behind our backyards,” she said.

“It is not something we need to be told by the news. It is something we're seeing here every single day, and me, that I came here when I was six years old. I was blessed to come here legally, but I don't want my experience to be a rare experience,” the congresswoman-elect said.

“I want more children like myself to be able to come here to the United States legally as well and the Biden administration's policies are only hurting immigrants, hurting the American people, and because of him, we had, we have an increase of child trafficking in this country and this is all on the Biden administration and Vicente Gonzalez is part of the problem as well here in south Texas,” Flores said.

She said wants to improve the immigration process, because she thinks it’s “outdated.”

“So we need a process where it is safer and faster for the good people that want to come here to the United States and work hard for the American dream,” the congresswoman-elect said.

“I do believe that we need to focus on legal immigration, not illegal immigration, that it’s only funding criminal organizations and of course also increasing human smuggling and human trafficking and also child trafficking, and children are innocent no matter where they're from,” she said.

“They need to be our priority in keeping them safe, and the Biden administration is not doing that,” Flores said.

The congresswoman-elect said that Vice President Kamala Harris is “useless,” and DHS Secretary Alejandro Mayorkas “should be impeached,” because he’s “only looking after himself and the Biden administration.”

“He’s not looking after the Border Patrol agents that are out there every single day risking their lives and constantly getting criticized by this administration for enforcing the laws that they put in place, and we need to go– we need to start enforcing the laws that we already have and put back the policies that the previous administration had that were working,” Flores said.

Flores said that “it makes no difference” that she’ll be up against a Democrat in the midterm elections, because she’s “confident in the work that we're doing here in South Texas.”

“I'm very proud of my amazing team. We're going to win that re-election through hard work and dedication,” she said.