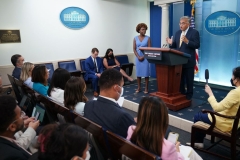 (CNSNews.com) - The White House said that 17 people have been identified as close contacts of President Biden after the president’s positive COVID test on Thursday, and they’ve all been contacted.

“So the White House medical unit has identified and informed 17 people, determined to be close contacts of the president, including members of his senior staff. None of the staff members have tested positive to date, and all of them are wearing masks around other people per CDC guidelines,” White House Press Secretary Karine Jean-Pierre said Friday.

“No members of the press have been identified as close contact as well, and this also includes the member of Congress that he traveled with recently,” she added.

Harris’s mask was off during the entire interview.

When asked whether Harris was following the Centers for Disease Control and Prevention’s (CDC) guidance on COVID close contacts, COVID Response Coordinator Ashish Jha said Friday that he couldn’t  specifically answer that, because he has not been tracking the vice president’s activities, and she has recently also had COVID.

“Vice President Harris is a close contact of the president’s, and the CDC guidance says if you’re a close contact, you want to wear a well-fitting mask when you’re around other people. She just spoke at a conference in D.C., and she hugged someone without a mask on. She was also maskless for most of that conversation. Would you have recommended that she keep her mask on given that that is the CDC guidance?” CNN White House Correspondent MJ Lee asked.

“I think– I’m not sure what—I have not been tracking the vice president’s activities, so I don’t have anything specific to say about what she did. My understanding is that the vice president is following CDC guidelines on close contact. She’s also recently been infected, so within the 90 days of a previous infection,” Jha said.

He asked Jean-Pierre if she had anything else to offer on the vice president, and she said, “No.”

“I guess she isn’t following the CDC guidance though, right, if she is hugging someone without a mask on? Just wanted your clarification on that,” Lee said.

“I think the CDC guidance is clear, but the problem is me commenting on what the vice president did when I actually– I haven’t seen it or I don’t actually know what happened is very, very difficult, so I’m going to pass on that,” Jha said.

“She took off the mask and she embraced someone. You don’t have to see it. I mean. That’s what happened,” another reporter shouted.

“So usually when we think about people having contact, it’s for extended period of time. Again, I didn’t see the hug. I don’t know how long the hug lasted, but it’s very hard for me to comment on something I really didn’t see, so,” Jha said.