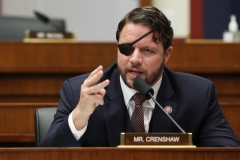 Representative Dan Crenshaw questions witnesses during a House Homeland Security Committee hearing about "Worldwide threats to the Homeland" on Capitol Hill on September 17, 2020 in Washington, DC. (Photo by CHIP SOMODEVILLA/POOL/AFP via Getty Images)

(CNSNews.com) - Rep. Dan Crenshaw (R-Texas) pushed back Friday on the notion that the U.S. military is racist after the nation’s first black defense secretary, Lloyd Austin, refused to answer a simple yes or no when asked during a Senate Armed Services Committee hearing on the DoD’s FY 2022 budget request.

During the hearing, Sen. Tom Cotton (R-Ark.) asked Austin, “Do you believe that our military is a fundamentally racist organization? Yes or no, please.”

“Well I won't give you a yes or no answer on that, Senator, because it deserves more than a yes or no,” the secretary said.

“Do you believe that any member of the military should be treated differently based on their skin color and sex? Again yes or no will do,” Cotton asked.

“No, I do not believe that,” Austin said. “That is why we have diversity, equity and inclusion focused in the military.”

During an interview on “Fox and Friends” on Friday, Crenshaw was asked for his reaction to Austin’s remarks and whether or not he believes the U.S. military is racist. The congressman said the reason why the military is not racist is because everyone is judged based on their own merits.

I definitely do not think the military is racist. It's probably one of the least racist institutions in America, if not the world. It is a truly a place where your skin color, your gender, your background can be set aside and meritocracy takes hold and you move up based on your own skillsets, based on your own judgment, based on your own leadership qualities and we see that time and time again proven in a place like the military and what is inclusive about the military?

Who could possibly be against that? Well, because they are playing footsie with critical race theory when they do that. It's not inclusive to be telling people about their whiteness and to be explaining to white people how they have privilege.

I mean, some of the feedback we got when we put this out, so we have a whistleblower page on my website and when people fill that in, it goes to me and it goes to Senator Cotton, so that's where all of these examples came from that Senator Cotton brought up, and there's things like white privilege walks, so take two-steps forward if you're white, a step back if you're black.

Tell me how that's inclusive? Tell me how that doesn't create divisions within our military. It really is problematic and I was really, look the secretary of defense got to the right answers eventually, but to say that it's complicated whether or not the military is a racist institution, I'm sorry no it's not complicated.

The answer is simply no and he got there eventually but that you shouldn't have to equivocate and what he's doing is he's trying to appease the progressives on the left while also being honest with himself because I don't think he honestly believes that.

Crenshaw said that the military is using critical race theory without calling it that.

We were letting transgender soldiers go on CNN and politicize their behavior there, and just the fact that we even changed the policy to say look, we're going to use taxpayer dollars to allow gender transitions and make you undeployable, make you unable to deploy and probably force you to be medically retired and then you'll be on the taxpayer dollar forever, so there's just a lot of concerning trends and don't let me forget, the extremism training they were shoving down everyone's throats and that was highly biased.

None of that extremism training ever mentioned BLM, Antifa, only mentioned conservative-related extremism and it's causing a serious decline in morale. Soldiers feel like they can't speak up. They feel like if they do they will be ostracized or fired and we need to change the incentives around. That's fundamentally why we're doing this.