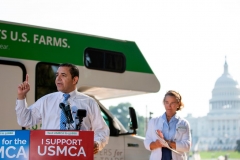 S Representative Henry Cuellar (L) speaks during a rally for the passage of the US-Mexico-Canada Agreement (USMCA) near the US Capitol in Washington, DC, on September 12, 2019. (Photo by ALASTAIR PIKE/AFP via Getty Images)

(CNSNews.com) – Rep. Henry Cuellar (D-Texas) agrees with DHS Secretary Alejandro Mayorkas that there is no crisis at the U.S-Mexico border, but the congressman said there soon will be if something isn’t done soon.

“It is not a crisis yet, but it will become a crisis. The numbers have been increasing, and as your report just said a few minutes ago, the numbers are just increasing every day. The number of unaccompanied kids, the number of families who are coming in are just increasing every day - in my district just a couple days ago 166 people - and it goes on and just different numbers are going up, so It is not a crisis yet but it’s gonna get there very soon,” he said in an interview with Fox News’s “America’s Newsroom” on Tuesday.

Host Bill Hemmer pointed out that Cuellar has said that you can’t say let everyone in, because border states are affected.

“Yeah, there are – listen, there’s nothing contradictory about that. I said yes, Of course you can't let people in, but that snapshot right now, is it a crisis? No. Is it getting there? Yes. You add COVID-19 on top of that. You add a lot of the border communities are not getting the vaccines fast enough,” Cuellar said.

“The fact that they aren't letting Mexican legal visa holders to come across but they’re letting undocumented people in, that does cause a concern to me and a lot of my border community leaders down there. So yes, and if you look at the Border Patrol, they're operating at 25 percent,” he said.
“With all due respect, though, 400 kids in one day without an adult. At what point do you say this is enough? The word from the White House yesterday we're not saying don't come, we're saying don't come now. What kind of message is that?” host Bill Hemmer asked.

“Well, again whether they’re the words of Donald Trump or Obama, President Obama or President Biden, the words that are spoken are not gonna stop them. You got organizations, criminal organizations that make billions of dollars, and every time they bring somebody over here they make a lot of money,” Cuellar said.

When asked whether vaccines should be made available to illegal border crossers, Cuellar said, “We take care of our people first. That's what we need to do. So that's what I want to see those vaccines. I got communities in my district, people that have been asking for vaccines in the rural areas on the border towns, and they aren't coming fast enough. I think we're gonna see those numbers ramp up with more vaccines, but I want to take care of my citizens first.”