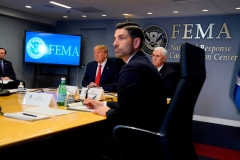 Wolf was in Portland, Ore., on Thursday to get a “first-hand look” at the damage done by violent protesters.

DHS is tasked with protecting the courthouse and other facilities in downtown Portland.

Wolf said they “continue to see violent activity, violent anarchists night after night targeting those facilities.” He stressed that he saw peaceful protests in Portland, and DHS has no problem with that.

“We are talking about a different group of individuals that have become violent and that are targeting federal courthouses, and we’re not going to let that stand. What I saw yesterday was a DHS force. We have about a hundred or so federal officers there to make sure that we support that courthouse, defend that courthouse,” he said.

“They are motivated, morale was high, and they’re going to continue to do their job day after day. Portland Police, they want to be a partner. They want to protect their community,” Wolf said.

“Again, I think the concern that I have are the local leadership, local and state leadership, they are fostering an environment where it's very difficult for law enforcement to do their job, and they are not coming out in my view, in my opinion coming out strong enough, condemning the violent activity there in Portland,” he added.

Portland Mayor Todd Wheeler said he told Wheeler that his “biggest immediate concern is the violence federal officers brought” to city streets and “the life-threatening tactics his agents use,” adding, “We do not need or want their help.”

When asked whether his officers have overstepped their bounds when dealing with riot control, Wolf said, “No, absolutely not. Here’s the situation on the ground. Again, we have these violent protesters coming in, targeting the courthouse, targeting a federal park, targeting other federal buildings, and again our law enforcement officers are going to respond in kind. They have been judicious in that. They are getting attacked night after night after night.

He said that targeting the courthouse and other federal facilities is against the law.

“It’s criminal activity, and they need to speak out against that, because again what they are doing, they are fostering an environment. I heard from local law enforcement officials there, very concerned about the atmosphere in which Portland is operating,” Wolf said.

“If you go back to 2018, we saw the same response. In Portland, an ICE facility was laid siege to for 28 days while again local leaders and law enforcement did very little to intervene. So this is an ongoing pattern in Portland. It’s very, very concerning. I was out there to look at it to send a signal that again DHS is not going to retreat from its authorities and responsibilities,” he said.

Wolf said he disagrees with the mayor’s assertion that federal officers have escalated an already tense situation and that politics is behind it.

“I placed a phone call not only to the mayor but to the governor earlier this week. My message was simple. What can DHS do to partner with you and bring an end to this violence? It was that simple. I offered assets, capabilities, and the one thing they said, they cut me off. They didn't want to listen. They said, please remove all of your law enforcement officers from Portland,” he said.

“I wanted to reach out. I wanted to partner with them to bring this violence to a conclusion, and instead of partnering, you mentioned the tweet storm that occurred, and they have been prolific over the last several days. I wish they would use the energy, they are talking about my trip to Portland to focus on the violent activity that's going on in their community,” the DHS secretary said.