The United States men’s national soccer team beats Iran 1-0 in Tuesday’s World Cup game in Qatar. The U.S. advances to the next round of the competition. Iran has been eliminated. 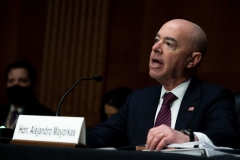 (CNSNews.com) – DHS Secretary Alejandro Mayorkas told the Senate Judiciary Committee on Tuesday that “the great majority” of illegal immigrants caught crossing the U.S. border do show up at immigration hearings.

He also said that DHS tests migrants detained at the border for the coronavirus and isolates and quarantines those who test positive.

Sen. Dick Durbin (D-Ill.) asked the secretary at a DHS oversight hearing, “The phrase ‘catch and release’ is used by your critics to suggest that some people who manage to get across the border and make some claim have a right under asylum law to be in the United States are released and never seen again, that they somehow go into the nation at large, don’t show up for their hearings, and that it’s worse now than it was under the Trump administration. Is that true?

MAYORKAS: Mr. Chairman, the term ‘catch and release’ has been used very loosely for many, many years across different administrations. Individuals who are not removed, who are now expelled under the CDC’s Title 42 authority are placed into immigration enforcement proceedings. Those who abscond are a priority for removal under the immigration enforcement priorities that I issued on September 30th.

DURBIN: Do they show up at their hearings?

DURBIN: Are there conditions that you can suggest would make it more likely that they show up at their hearings?

MAYORKAS: And we are imposing those conditions, Mr. Chairman. We have alternatives to detention for those who are not in immigration detention. We have imposed conditions of parole with alternatives to detention, and those conditions better ensure their appearance in court. We are communicating with individuals more effectively, because sometimes it is not an intent to abscond but a misunderstanding of the requirements in a very labyrinthian immigration system, but we are really focused on this effort.
DURBIN: Another one of the Fox greatest hits are that you don’t do COVID-19 testing and that in fact, you’re turning these migrants loose at our border without a test, and they are spreading COVID across our country. Is that true?
MAYORKAS:  Mr. Chairman, we test migrants. We place them in isolation or quarantine as the results of those tests require. We have built in an architecture with non-governmental organizations and across the federal enterprise to test migrants, and in fact, when non-governmental organizations assist us in that effort, we have provided for FEMA reimbursement for them through the states if those states cooperate with us.
DURBIN: We know that smugglers are endangering and exploiting those migrants who are anxious to find a better place to live. We saw that just recently in Del Rio, Texas, when so many Haitian immigrants seemed to appear almost by design, tens of thousands of them. How did they happen to all come together during that period of time?
MAYORKAS: Mr. Chairman, we have a number of efforts directed at tackling the smuggling and trafficking organizations. Operation Sentinel is one of them where we are going after their logistics and watching the money and apprehending them that way. I have met several times with the attorney general of Mexico and assisted in the apprehension of organizational leaders. We are very focused on the organizations that export the vulnerable and facilitate irregular migration and illegal crossings.
DURBIN: My last question. What is the backlog in our immigration courts? I understand it was 1.4 million cases at the beginning of the Biden administration. Has there been any progress made?
MAYORKAS: There has been modest progress, Mr. Chairman. This is something that we are very focused on. This has been an enduring challenge. It speaks to the fact that our immigration system is broken and in dire need of legislative fix.