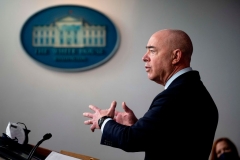 Secretary of Homeland Security Alejandro Mayorkas speaks during the daily press briefing at the White House in Washington, DC, on March 1, 2021. (Photo by JIM WATSON/AFP via Getty Images)

(CNSNews.com) – DHS Secretary Alejandro Mayorkas denied the notion Monday that there is a crisis at the U.S.-Mexico border despite the number of illegal immigrants entering the U.S. being at levels three and four times that which were deemed a crisis by former DHS Secretary Jeh Johnson, who served the Obama administration.

When asked whether he believes there was a crisis at the border, Mayorkas said, “The answer is no. I think there is a challenge at the border that we are managing, and we have our resources dedicated to managing it.”

Fox News White House Correspondent Kristen Fisher noted that there are 200 migrant children crossing the border daily and that Customs and Border Patrol (CBP) projected a peak of 13,000 unaccompanied children in May, pointing to a report by Axios. She asked what was being done between now and then when Mayorkas implements the strategies that he said will take time.

“Let me answer that question with tremendous pride. The men and women of the Department of Homeland Security are working around the clock seven days a week to ensure that we do not have a crisis, that we manage the challenge as acute as the challenge is, and they are not doing it alone,” the DHS secretary said.

“This a challenge that the border companies, the non-governmental organizations, the people who care for individuals seeking humanitarian relief all understand it is an imperative.  Everyone understands what occurred before us, what we need to do now, and we are getting it done,” he said.

Fisher pointed out that Johnson said that he considers 1,000 illegal border crossings a day a crisis. She noted that CBP estimates the current number is at 3,000 to 4,000. “How is this not a crisis?” she asked.

“I have explained that quite clearly. We are challenged at the border. The men and women of Department of Homeland Security are meeting that challenge. It is a stressful challenge, and we are—that is why quite frankly we are working as hard as we are, not only in addressing the urgency of the challenge but also in building the capacity to manage it and to meet our humanitarian aspirations and execution of the president’s vision,” Mayorkas said.