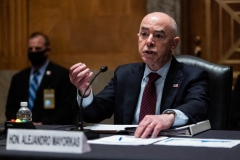 Department of Homeland Security Secretary, Alejandro Mayorkas, testifies before a Senate Homeland Security and Governmental Affairs hearing on the department's actions to address unaccompanied immigrant children, on Capitol Hill in Washington, DC, May 13, 2021. (Photo by GRAEME JENNINGS/POOL/AFP via Getty Images)

(CNSNews.com) – DHS Secretary Alejandro Mayorkas said Wednesday that what is happening at the border “is not an invasion” and that the Biden administration is improving the administrative process in a way not done before by prior administrations.

During a House Appropriations Subcommittee hearing, Rep. Steven M. Palazzo (R-Miss.) asked Mayorkas what the administration is doing to stop the “invasion taking place on our southern border.”

I just got back from the border late last night. I was down there with 12 of my colleagues, and what we’re seeing and what we’re hearing on the border isn’t what we’re hearing from the administration or the mainstream media. There’s absolutely an invasion taking place on our southern border. Single adult men by the hundreds every night trying to break into our border. Unaccompanied children, family units are just walking up and turning themselves in.

There’s one winner in all this, and right now it’s the cartel, and the one loser is the American people. My understanding is families will pay thousands of dollars to have one person smuggled into America or smuggled across the Northern Triangle through Mexico. Sometimes it costs several thousand dollars per state to pass, but the cartels bring them in, and just as we’ve seen a couple weeks ago, they will dump children even over the border fence, and if wasn’t for our brave and committed CBP officers, those children’s lives could have been in danger, but it’s not just children.

On my flight back last night, there was a lady who also paid smugglers to get into our country, and she had a full body cast on. They pushed her over the fence, and she broke her back where then the American people took care of her and provided for her medical services, and now she’s off to whoever knows where to her sponsors, but she was alone on that flight.

I mean there were several illegals who came into our country – minors that are flying all across the United States, so effectively, Mr. Cuellar’s not the only person that’s practically living on the border, because we’re turning all our states into border states with our policy, so I guess real quick, what is the administration doing to stop this?

Because it doesn’t look like what they’re doing is working. It looks like you rolled out a big welcome mat to say, send us your kids, and that is, that is criminal, because as long as they know that they get to our border that we’re gonna take them, and we’re gonna turn them into American citizens and let them roam free around our country, these people desperate in these countries are going to continue to take that risk, an unnecessary risk, I might add. So please tell me what this administration is doing.

Mayorkas insisted that what’s happening at the border “is not an invasion,” adding that “people are not coming in without regular order.”

Congressman, a few things. First of all, I appreciate your recognition of the bravery of the men and women of the United States Border Patrol. Secondly, I appreciate your articulation of the cruelty of the human smuggling networks and the cartels. That is precisely why we have enhanced our efforts to tackle the activities of the smugglers, the traffickers, the cartels. We have operated for example. We’ve launched Operation Sentinel in the last four weeks to build upon the work that preceded this administration.

Your characterization, however, with respect to how we are addressing individuals apprehended at the border, I must respectively disagree with from beginning to end. Individuals are expelled under Title 42 of the United States code. Those who are not expelled are placed into immigration proceedings where they are able to make the claims for relief under laws that Congress passed, and if their claims for relief do not prevail, then they are removed from the United States, and so we continue to enforce the immigration laws, and I should say that we are improving the administrative processes in a way that has not been done before – not by the prior administration, nor by administrations before then.

Most notably, I should comment to ensure that the asylum system while making sure that it follows due process requirements is more expeditious and delivers justice with greater speed for the American public and for the migrants who are claiming humanitarian relief, and so it is not an invasion. People are not coming in without regular order. They are being placed in immigration proceedings. They have the ability to make a claim as the law provides to an asylum officer, to an immigration judge in the courts of the United States.