DHS Secretary: We Have a Plan in Place for Migrants Once Title 42 Is Gone 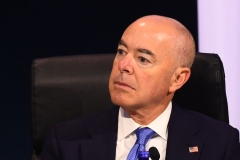 (CNSNews.com) – DHS Secretary Alejandro Mayorkas told Congress on Thursday that his agency does have a plan in place for give consequences to migrants who enter the United States unlawfully once Title 42 is terminated in December per a court order.

As CNSNews.com previously reported, a federal judge in D.C. blocked the Biden administration from using the Trump-era Title 42 emergency health order to expel migrants from the United States. The administration had been using Title 42 to prevent Venezuelans – which it said made up a large number of migrants entering the U.S. recently – from entering the country without authorization, returning them instead to Mexico.

During a Senate Homeland Security Committee hearing on the threats to the homeland, Sen. Kyrsten Sinema (D-Ariz.) asked the secretary, “With the sudden announcement that Title 42 will be terminated in December, I’m extremely worried that DHS is not worried and our border communities and migrants will suffer a cost for this lack of preparation. It’s obvious that the current strategy being implemented at our southwest border’s not working, and change is necessary.

“These current levels of migration are unprecedented. Following the D.C. Circuit’s recent ruling regarding Title 42, Arizonans are concerned that we’ll soon see these numbers surge even higher, and we need to send a clear message to potential migrants that we will be fair and humane, but we will secure our border and enforce our laws. Given the recent developments regarding Title 42, do you have a plan to ensure that those who enter without inspection are facing swifter and more certain consequences?” the senator asked.

Mayorkas pointed to the administration’s decision to build “a lawful pathway” for Venezuelans to “arrive safely” and in an orderly fashion to the United States once they qualify for entry and have been vetted.

We do have a plan, and I think there are a number of examples. One is how we’ve approached the increased number of encounters of Venezuelan nationals by building a lawful pathway for them to arrive safely and in an orderly way to the United States should they qualify and should they pass through our screening and vetting and to deliver a consequence regime should they not avail themselves of that lawful pathway.

The asylum rule that we have promulgated is a way of taking a broken asylum system, and we’re grateful for your bipartisan work with Senator Cornyn in your proposed bill as a starting point to fix a broken asylum system, but we promulgated a regulation in the absence of much needed legislation to fix the system, which takes a 6- to 8-year asylum period, which is just unmanageable, and reduces it potentially to under a year, which is going to change the migratory patterns of individuals seeking asylum in this country.

Also with respect to the fact that you mentioned that Border Patrol agents have not been out in the field, we’ve actually surged resources to the southern border, not only the different parts of our department, but contract personnel, an incredible number of contract personnel so that we can get those agents out in the field doing what they swore to uphold, which is the detection and interdiction of individuals to enhance their swift removal should they not qualify for relief and their ability to remain in the United States should the law so permit.