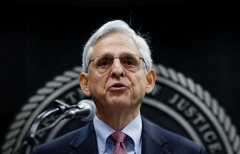 Attorney General Merrick Garland delivers remarks at the swearing in ceremony of the new Bureau of Prisons (BOP) Director Colette Peters, not pictured, at BOP headquarters in Washington, DC, on August 2, 2022. (Photo by EVELYN HOCKSTEIN/POOL/AFP via Getty Images)

(CNSNews.com) - The Justice Department announced Tuesday that it has filed a lawsuit to protect doctors from being prosecuted for violating Idaho’s abortion law, which bans abortions except in the cases of rape, incest or to protect the life of the mother.

According to the DOJ, “The complaint seeks a declaratory judgment that § 18-622 conflicts with, and is preempted by, the Emergency Medical Treatment and Labor Act (EMTALA) in situations where an abortion is necessary stabilizing treatment for an emergency medical condition. The United States also seeks an order permanently enjoining the Idaho law to the extent it conflicts with EMTALA.”

“On the day Roe and Casey were overturned, we promised that the Justice Department would work tirelessly to protect and advance reproductive freedom,” said Attorney General Merrick B. Garland.

“Federal law is clear: patients have the right to stabilizing hospital emergency room care no matter where they live,” said Department of Health and Human Services Secretary Xavier Becerra.

“Women should not have to be near death to get care. The Department of Health and Human Services will continue its work with the Department of Justice to enforce federal law protecting access to health care, including abortions,” Becerra added.

“Today’s lawsuit against the State of Idaho for its near-absolute abortion ban is the first public example of this work in action. We know that these are frightening and uncertain times for pregnant women and their providers, and the Justice Department, through the Task Force’s work, is committed to doing everything we can to ensure continued lawful access to reproductive services,” Gupta added.

The complaint says that once the Idaho law takes effect, “a prosecutor can indict, arrest and prosecute a physician merely by showing that an abortion has been performed, without regard to the circumstances.”

Furthermore, “A physician who provides an abortion in Idaho can ultimately avoid criminal liability only by establishing as an affirmative defense that ‘the abortion was necessary to prevent the death of the pregnant woman’ or that, before performing the abortion, the pregnant patient (or, in some circumstances, their parent or guardian) reported an ‘act of rape or incest’ against the patient to a specified agency and provided a copy of the report to the physician. The law provides no defense for an abortion necessary to protect the health of the pregnant patient.”