Eric Trump: We Can Release Surveillance Footage of FBI Raid ‘At the Right Time’ 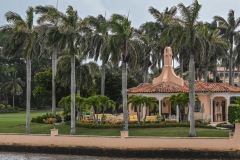 (CNSNews.com) – Former President Trump has surveillance footage of the FBI raid on his home at Mar-a-Lago, because despite the FBI’s request for him to turn off the surveillance cameras, no one did, and Trump can share it publicly “at the right time,” his son Eric Trump said Monday.

Trump’s attorney Lindsey Halligan told Fox News’s “Hannity” on Monday that she and another Trump attorney were denied access to the property by the FBI, and the FBI asked the former president and his managers to turn off the surveillance cameras, “which they didn’t.”

When asked why she and another Trump attorney were denied access to watch what was going on and who they were asking to turn off the cameras, Halligan said, “They didn't give us a reason for preventing us from going inside the property. I even tried to get in the property just for sake of air conditioning, because it was like 95 degrees outside, and they were there from 10:00 A.M. To 6:30, I think, but they wouldn't even let me stand inside the property where they weren't searching. They asked President Trump, and I think his managers, to turn off the surveillance, which they didn't.”

The former president’s son also told Hannity that the surveillance footage exists, and when host Sean Hannity asked whether he still has the surveillance tape and whether he’s allowed to share it with the country, Eric Trump said, “Absolutely, Sean, at the right time, and your bodycam point was spot on. That's why cops wear bodycams. They don't tell you to turn off cameras. They want transparency, and that's not what happened here.”

“And you know for a fact they asked for the cameras to be turned off?” Hannity asked.

“They asked for the cameras to be turned off,” Eric Trump said.

He said that the FBI raid has boosted the Trump’s fundraising and popularity, and that people have been vocal about their support of the former president.

It’s caused the greatest fundraising. My father's poll numbers have absolutely gone through the roof. They're not even talking about any other Republican candidates, because they’ve all kind of disappeared. They're not even in the equation.

“Last night I had an argument between two people in a restaurant who were trying to buy Laura and I dinner to apologize for what the United States government has done to our family, Sean. I mean, you wouldn't believe the energy out there. I've been through all of these fire storms over the year, I've never seen America more mad than it is right now. There's only so many times you can cry wolf.

People are not buying the sham in the country. They see the weaponization of the FBI. They're calling it the police state in this country. People get this for what it is, Sean. You know, they've removed the wool from people's eyes and people know exactly what's going on. They're targeting Donald Trump.

Eric Trump said that prior to the raid, his father was cooperative.

My father has been so cooperative, and that's what doesn't make sense to the whole family. My father said, “Anything you guys need, let us know. Anything you need, let us know.” The lawyer when I first told him about this, he goes, “I can't believe this. We had the greatest relationship with these people. Your father literally was with them in early June, and said, ‘Anything they need, you let us know, and we'll give it to you.’”

Eric Trump called the FBI raid “a fishing expedition,” and he said that information is being leaked about Trump to the same reporters who were used as sources for the Russia hoax.

I mean they pulled the warrant on Friday, they didn't actually execute the warrant until Monday. So when I hear about these nonsense speculations about nuclear codes. So FBI agents were so busy over a weekend, over nuclear codes they waited four days. I mean it's nonsense. It’s absolutely phishing.

It’s the same reporters reporting on the same thing, the same story. They’re going to their friends in the Democratic media who are effectively the lobbyist arm of the Democratic Party, and they’re leaking stories about Donald Trump to hurt him. We're 90 days out Sean from the midterms. It's not surprising. This timing is not surprising and it's backfiring on these people.