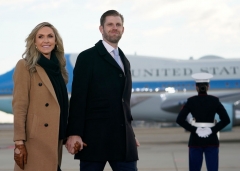 Eric Trump and his wife Lara arrive for outgoing US President Donald Trump and First Lady Melania Trump's departure at Joint Base Andrews in Maryland on January 20, 2021. (Photo by ALEX EDELMAN/AFP via Getty Images)

(CNSNews.com) – Former President Donald Trump’s son, Eric Trump, who serves as the executive vice president of the Trump Organization, said Tuesday that President Joe Biden’s policies during the past 100 plus days are making people miss having Trump in the White House.

“I think every single day that these policies are just taking down the country and hurting frankly our dominance in the world. I can tell you more people have come up to me on the street in the last week and given me hugs, saying we miss him so much. I mean literally sometimes, Sean, with tears in their eyes – ‘we miss the man so much,’” he told Fox News’s “Hannity.”

Host Sean Hannity noted that Biden is clearing the way for a pipeline in Russia. This comes after Biden blocked the Keystone Pipeline in the U.S.

Fox Business reports that the Biden administration plans to waive sanctions on the company and CEO overseeing the Nordsteam 2 pipeline construction. The deal with Russian President Vladimir Putin will transfer Russian gas to Germany through a pipeline that runs under the Baltic Sea. If completed, it will double the amount of natural gas that Russia transports directly to Europe.

“Can you believe that Joe is giving Putin a pass on the pipeline to Europe to make Russia rich again?” Hannity asked.

“What’s ironic is he cancels all our pipelines in this country, right? You see the devastating effect that one pipeline being down the last week has had on this nation, yet the XL Pipeline and many others he wants to cancel. He wants to stop all drilling, but that's fine,” Eric Trump said.

“In Ukraine they can drill. So long as your son is on the board of the energy company, drill away Ukraine, but if he’s not, you know what, let’s get rid of all drilling. Let’s get rid of all oil and gas. Let’s put up wind turbines that aren’t working. I mean Sean, it’s a farce. It's an absolute joke,” he said.

Trump said that Russia, China, and Iran are “licking their lips" because of Biden's leadership.

“If you’re Putin right now, you’re watching what is happening on the Gaza Strip. You’re watching what’s happening with Israel, and you’re saying, you know what, America’s letting them get away with this, so why don’t we do the same to the Ukraine, or China’s saying, why don’t we do the same with Taiwan. Countries around the world are looking at this weakness,” he said.

“People don't want to work because so much stimulus is going out every single day. Small businesses can't get employees. People aren’t going back to work. It's an absolute mess. What this guy has done to this country in 120 days, 130 days, I mean just the lack of leadership in Washington makes you shake your head,” he said.

“You might not like a mean tweet once in a while, but at least you knew that Donald Trump was out there fighting for the greatest country in the world, which is the United States of America and red, white and blue,” Trump added.