Florida AG: Border Enforcement Is ‘One of the Most Important Issues Facing the Stability of Our Country and Our States’ 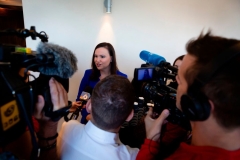 (CNSNews.com) - Florida Attorney General Ashley Moody said Monday that border enforcement is “one of the most important issues facing the stability of our country and our states” and she said it’s going beyond prosecutorial discretion to decide not to enforce existing immigration law.

Moody is one of 19 state attorneys general who have filed a friend-of-the-court brief in the Supreme Court case brought by Texas and Louisiana attorneys general challenging the Biden administration’s policy that halts most deportations and prioritizes migrants deemed a serious threat to national security or public safety.

“Florida was the first to file an action on this issue. Just let me boil it down for you. Immediately upon taking office. Biden in his steady march to become our trafficker-in-chief, his first policies with Secretary Mayorkas decided they were going to stop following federal public safety immigration laws, that require - again I will repeat this - require DHS to deport and detain those in our country illegally that are committing crimes while they are they are here illegally,” she said.

“This included very serious offenders: drug traffickers, burglars. I mean I could go on and on, and what they said was, no those aren't going to be our priority. We’re not going to focus on them. We won't follow federal law. We are going to focus on these other people. That’s our new policy,” Moody told Fox Business’ “Mornings with Maria Bartiromo.”

“So as you can imagine as attorney general, when I started getting desperate calls from sheriffs who were saying they’re telling us we have to release serious offenders back into our communities, we filed suit immediately. It was the first one that Florida filed suit on. As you can imagine, I am leading amicus arguments to support this Texas case, because the issue is so important,” she said.

“I think this is one of the most important issues facing the stability of our country and our states, and you pointed out it in your last segment when you showed this area in New York where you have an executive official, a prosecutor that’s refusing to follow the law that lawmakers give them, and he’s going around lawmakers and deciding what is going to be a felony, who he is going to detain. It’s going beyond what is called prosecutorial discretion,” the Florida attorney general said.

“The same thing is happening at the border. You have those charged with enforcing the law - Biden, Mayorkas who have said, We're not going to follow federal law. We are going to decide what the law is going to be, and that’s what they have tried to do through this policy. That’s what’s happening in our large cities around the country. This is a very, very important issue, and one that needs to be closely watched,” Moody said.

President Biden “is not putting the interests of American citizens and the security and safety of this country first,” the Florida attorney general said. “It’s obvious. That’s what you are seeing from other mayors and prosecutors in large cities. They’re not putting the safety of citizens first. They’re refusing to follow the law.

“When you get an executive official in office that is charged with enforcing the law, that’s been elected to enforce the law that stops doing that and starts implementing another agenda, which undermines public safety and security, it’s like termites. It takes what was once a strong criminal justice House, what was once, a strong border that safeguarded interests, and it starts chipping away at the strength,” Moody said.

“You can see it all over the nation. What’s happening at our border is happening in our large cities - L.A. Portland, Chicago, New York. If you stop enforcing the law that lawmakers have given you to enforce, it’s like termites, and your house will collapse. That’s why I’m so happy to work with governors like governor Desantis who says we will protect this house. We’ll protect our country. We’ll protect our state. You know how to do that? It’s simple. Enforce the laws,” she said.

Moody is calling for Mayorkas to be removed as DHS secretary.

It is Joe Biden's administration. The fault with what is happening in our country is a result of a chaotic unobscure border lies with Joe Biden, but Mayorkas has to go. I’ve called for it since last year when I saw the dismantling of the public safety structure at the border by Mayorkas. He first did this insane policy where he stopped deporting those here illegally, committing crimes.

He then said we’re going to stop detaining and deporting those that were not admissible under federal law. We’re just going to stop doing that. We’re gonna overhaul domestic immigration enforcement. Then they started building programs to make it easier to violate federal law. All of this has been happening mind you while Title 42 was in place.

Remember, when Trump was in his last month, he only released 17 people. When Title 42 gets rescinded December the 21, this breakdown, the termites that have been eating away since Biden took office at the strength of this immigration system, when Title 42 gets rescinded, we are going to see the strength of this country, and the border tested, like never before because they have been weakening it all along.