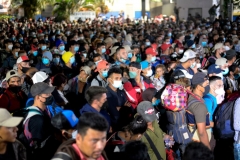 Thousands of Honduran migrants push through the police fence as they attempt to cross the border at El Florido in Guatemala forming the first migrant caravan of the year on it's way to the United States on January 15, 2021. (Photo by JOHAN ORDONEZ/AFP via Getty Images)

(CNSNews.com) – Former acting CBP Commissioner Mark Morgan accused White House Press Secretary Jen Psaki of lying about the reason why the Biden administration has reopened a CBP facility in Texas that the president and vice president once criticized for keeping kids in cages.

As CNSNews.com previously reported, Psaki explained Tuesday that the facility was temporarily reopened because of social distancing.

However, Morgan told Fox Business’s “Mornings with Maria Bartiromo” on Wednesday that the reason the facility was reopened was to keep up with the high demand from illegal immigrants entering the U.S. because of President Joe Biden’s executive orders on immigration.

“Look, Maria, there's so much to unpack there. There's so much hypocrisy, false narratives and the president's press secretary lied to the American people. Those facilities aren't needed because of COVID. That's absolutely not true,” he said.

“Those facilities are needed because this administration is now encouraging, incentivizing and facilitating illegal entry in the United States and the numbers have skyrocketed - 78,000 last month, 3,500 a day, and they're reinstating catch and release,” Morgan said.

“That's why these facilities are needed, because they’ve created a new crisis and then on the back end, they’re preventing - not only are they releasing illegal immigrants into the country but then they’re preventing ICE from lawfully deporting 90 percent of those that they're encountering here illegally. It's absolutely absurd what we're watching happening in front of us right now,” he said.

“So you and I have spoken about this, and you say that there's about, what, 3500 people showing up to our borders every day, is that right? Or is it 4,000 people coming every day, Mark?” host Maria Bartiromo asked.

“Actually, more than that,” Morgan said. “We're apprehending about 3500 a day, but you add in those that turn back to avoid apprehension and those that get away, it's closer to 4,000, 4,500 a day that’s trying to illegally enter our United States every single day.”

On Tuesday, a federal judge granted a preliminary injunction blocking the Biden administration’s moratorium on deportations, in response to a lawsuit filed by Texas Attorney General Ken Paxton.

“This preliminary injunction is granted on a nationwide basis and prohibits enforcement and implementation of the [100-day pause] in every place Defendants have jurisdiction to enforce and implement the January 20 Memorandum,” U.S. District Judge Drew Tipton, who was appointed by former President Donald Trump, wrote in the ruling.

Tipton agreed with Paxton that a 100-day pause in deportations will cause financial harm to the state of Texas.

“[T]he core failure of DHS lies not in the brevity of the January 20 Memorandum or the corresponding administrative record, but instead in its omission of a rational explanation grounded in the facts reviewed and the factors considered,” Tipton wrote. “This failure is fatal, as this defect essentially makes DHS’s determination to institute a 100-day pause on deportations an arbitrary and capricious choice.”

“Look, Maria, I think I was on your show when that first executive order came out, and I said from the beginning, that executive order was unconstitutional, unlawful on its face and, look, this administration has been clear. From the White House, they are systematically dismantling every single effective tool and policy, so if the states think they're going to wait and rely on the federal government to help them, they're sticking their heads in the sand,” Morgan said.

“AG Paxton realized that, and he went to court. We're encouraging more states to do the same, and real quick, it should be not just the border states. I said from the beginning, every state in this country is a border state. More AGs need to step up and do what AG Paxton said and push back,” he said.

Former White House senior advisor Stephen Miller told Bartiromo on Sunday that the immigration reform bill that Biden and Democrats put forward proposes sending applications to deported illegal immigrants “giving them a chance to reenter the country on a rapid path to citizenship.”

“This is unheard of. These could be people that ICE officers at great time and expense found, large numbers of them with criminal records, returned to their home countries at taxpayer expense, and now we're going to have the secretary of state and homeland security mailing applications for re-admission and amnesty to previously deported illegal immigrants. This is madness,” Miller told Bartiromo on Fox News’s “Sunday Morning Futures.”

Morgan and Miller plan to brief GOP lawmakers on the legislation on Wednesday.

“He's absolutely right. What the administration is trying to do is remove the illegal part of the illegal immigration while simultaneously, as Tom Homan said it best – former director of ICE - creating a sanctuary country in the United States. From a law enforcement perspective, I can come to no other conclusion that they're doing so because they see a perceived political value in opening the borders and really creating a sanctuary country. It's unbelievable what's happening,” Morgan said.

The former acting CBP commissioner said that there’s still hope that Republicans can defeat the immigration reform bill, because “they still need a 60-member vote in the Senate to pass some legislation.”

“And look, this is what we have congressional leaders there to push back, to fight.  Right. And look, you're absolutely right. The states have to get more involved. They can't set back and think that somehow Congress is going to be able to do it and fix it all. It shows that they've been unable to do that. They failed decade after decade. The states are going to have to get involved,” he said.

Morgan said that the immigration crisis “is already here,” adding that “3500, 4500 a day trying, those are crisis level numbers. It's already here. The borders are open. It's only going .. get worse unless we stop what's happening right now.”