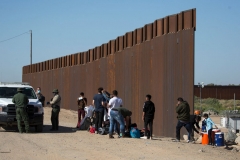 Migrants from Columbia wait to be processed after turning themselves over to authorities at the United States and Mexico border May 12, 2021 in Yuma, Arizona. (Photo by RINGO CHIU/AFP via Getty Images)

(CNSNews.com) – Former Acting ICE Director Tom Homan said Tuesday that the Biden administration is “so busy managing the optics” of the crisis at the border rather than dealing with the crisis itself.

“It's ridiculous. It is so embarrassing that this administration is so busy managing the optics of this crisis rather than dealing with the crisis. The president of Guatemala already said the reason this crisis is happening is because of Biden's policies. The president of Mexico said the same thing,” he told Fox News’s “America’s Newsroom.”

“They’ll tell her what is causing this crisis - the Biden policies and overturning Trump’s policies. She can go down there and talk to illegal aliens. I've been down there five times. I’ve talked to the people. They're coming and they tell you because Biden has opened the door. He is allowing them in, and he’s promised not to deport them, and he’s going to give them amnesty,” Homan said.

“This isn't rocket science. This is clear to the American people, but this administration is so busy trying to hide the truth that they’re not fixing the problem. You can't name one thing, Trace. You can't name one thing that administration has done to slow the flow. All this talk about optics. It’s President Trump's fault, seasonal. All the excuses to hide the truth from the American people,” he said.

As CNSNews.com reported, Vice President Kamala Harris said she’s been to the border before she was vice president, but Homan said that she used her visit to vilify the Border Patrol.

“Oh yeah, Kamala Harris says she’s been to the border. Yes, she’s been down to the border vilifying the men and women of the Border Patrol, how they treat these people. Under the Biden administration children are dying and have died. Children are being abandoned. Thirty percent of women are being raped. Cartels are making billions,” Homan said.

“This humanitarian crisis has turned into a national security crisis, and the Biden administration is doing nothing about it. They’re focusing on how quickly we process people. They’re building billions of dollars in processing centers to process people quickly and release them,” he said.

“They think that's a good optic, because it shows there is no overcrowding, nothing to see here, but the truth is when you make it easier for people to come to the country and get released quicker, that’s just going to bring more. They need to talk to people on the border. Bring me back. I'll secure the border in three days, three days, because I will reinstitute the Trump policies and I’ll tell the Progressive Left to shut up. If you don't like what's on the border, legislate like you’re supposed to legislate and fix the laws,” Homan said.

He said the Trump administration fixed the problem at the border, and illegal immigration dropped by 80 percent.

“We fixed it. Illegal immigration was down 70 to 80%. How many women didn't get raped when it was down 80 percent? How many children didn’t die? How many millions of dollars did the cartels not make? How much opioids didn't cross that border when we secured it? They need to listen to the experts regardless of whether they’re Trump people or not,” Homan said.

“I spent three decades on that border. I forgot more about this issue than anything this present administration will ever know, so you need to count on the experts. Don't talk to me. Talk to the men and women that are wearing the green uniform. They’re down there. They’re in the battle. Talk to those men and women. They'll tell you how to fix this. Again, three days we can secure the border. If they really want to secure it, let's do it,” he said.