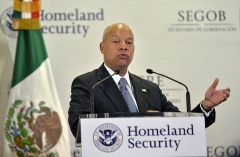 (CNSNews.com) - It takes six years to process asylum claims, and out of the 70 percent of migrants who establish a case of credible fear, which is a relatively low bar, only about 20 percent ultimately qualify for asylum, and “migrants know this,” former DHS Secretary Jeh Johnson said Sunday.

“Well, first, Margaret, I have to be honest about the asylum laws and the processes,” Johnson, who served during the Obama administration, told CBS’s “Face the Nation.”

“It takes six years right now to process an asylum claim once someone has entered this country, and one of the problems is that the bar to qualify initially and establish a case of credible fear is relatively low, something like 70 percent of migrants qualify who seek it, and the ultimate qualification for asylum, the percentage there, is only about 20 percent, and it's six years in between,” he said.

“Migrants know this, and so we've got to develop a system where we can more expeditiously deal with these claims, but also take a look at the credible fear standard itself. I know my friends on the left won't be too happy to hear that, but it does exist, and it's a phenomena,” Johnson said.

“No politician is going to take that vote,” host Margaret Brennan said.

“Well, it can be done possibly through regulation, and I think it's something that ought to be looked at. Now, in terms of Title 42, when CDC first announced in May that it was going to lift this, I and others were opposed to it. We thought there needed to be a more orderly transition,” Johnson said.

“It is an extraordinary authority, and it's probably time now for it to go away in December, but the ability to send people back expeditiously like the administration has been doing needs to now be replaced with something else, and I think there the discussion is going to have to take place with Mexico to more expeditiously accept people back,” he said.

“We sent back something like 1.4 million last year using, in part, Title 42. We need something to replace that, and I think working with the government of Mexico and, frankly, getting them to do more to step up on this is part of that answer,” the former secretary said.

Brennan pointed out that a Republican-led Congress plans to try to impeach DHS Secretary Alejandro Mayorkas.

“Does that mean all the things you suggested don't happen and Congress is just tied in knots?” she asked.

Former DHS Secretary Michael Chertoff said that “it would be a very sad day if -- in - in search of what is, again, a political stunt, you know, threatening to impeach Secretary Mayorkas, Congress didn't do the things, for example, that Secretary Johnson just suggested.”

“Maybe adjust the standard with respect to asylum, create more resources that are available to adjudicate, and work out additional ways to fund the effort to undermine the cartels and the smugglers, which are a big part of this,” he said.

“So, it would be basically putting form over substance to go through a big performance on impeachment that's never going anywhere, rather than actually working with the administration to solve the problem,” Chertoff added.

“Margaret, what people need to know, and Michael and I know this, the secretary of Homeland Security is focused on border security, maritime security, aviation security, cyber security, the Coast Guard, the Secret Service and a host of other things. We can't have a secretary who's distracted by - by a stunt in Congress, an attempt at impeachment,” Johnson said.