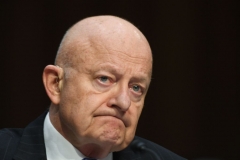 Former Director of National Intelligence James Clapper listens during testimony on May 8, 2017, before the US Senate Judiciary Committee on Capitol Hill in Washington, DC. (Photo by JIM WATSON/AFP via Getty Images)

As CNSNews.com previously reported, the emails purporting to be from the Proud Boys are “designed to intimidate voters, incite social unrest, and damage President Trump.”

CNN’s Chris Cuomo opened his show “Cuomo Prime Time” saying, “Officials say those were not from the proud boys. The proud boys themselves have denied any involvement in this, but our officials say they are from Iran, but then the director of national intelligence also said there was an additional motive to hurt Trump. We’ve seen no evidence of that, and none was offered. The House Homeland Security Committee tweeted this in response: ‘Do not listen to Radcliff, partisan hack,’ and followed up to say that Americans should listen to the FBI director instead.”

Cuomo claimed that Trump talked up the Proud Boys by saying, “stand back and stand by” when asked by Democratic presidential nominee Joe Biden to specifically denounce the group at the first presidential debate.

“The choice to use the Proud Boys is also relevant. It is proof that the president's influence at home and abroad is real, because he talked this group up, and he made them a target of opportunity for our enemies. Remember his message to the hateful Proud Boys of stand back and standby at the last debate. Now we know at least one foreign actor was listening,” the CNN host said.

“These foreign efforts are expected, by the way. We saw them in 2016. We see them all the time. What's not expected is for their goal to be given a boost by our president. No word from him about these findings tonight, and the timing of these findings also very interesting,” he said.

Cuomo called into question the timing of the announcement, because it came on the heels of former President Barack Obama’s stump speech for Biden.

“They come as President Obama hit the trail today for Joe Biden, and he gave the most forceful case against Trump that we've heard in this campaign. We have all the high points and analysis of what former President Obama said, but we have to see just how big a shadow he will cast over Trump's fate in this election. Certainly, Obama seemed more concerned about our national security from events like this tonight before the revelations than Trump has even after them,” the CNN host said.

McCabe explained that the voter information Iran and Russia got their hands on is easily acquired online.

“There is some voter information that's pretty easily acquired online. That's very different from actually probing the voter registration databases of individual states and staging a cyber-intrusion into those systems and stealing information. That's the sort of activity that we saw back in 2016. We know the Russians probed the voter registration databases of every state,” the former FBI deputy director said.

“If that's what's happening here, and again it is not clear that that's what -- that's not how they described it. Altering voter registration information can be a very serious threat, because you could essentially eliminate many people from the voter rolls and then when they show up on Election Day, they don’t get to cast a vote, and the statement was pretty vague. Just simply said they had acquired voter information,” he said.

Clapper also questioned why the press conference was held on the heels of Obama’s speech.

“You have to wonder about what were the motives at work here. Why a sudden press conference which evidence itself on the heels of President Obama's pretty historic speech,” Clapper said.

CUOMO: Good. I'm glad you said it, Jim, because I didn't want to seem cynical about it, but the timing is a little curious, right? They’ve known about these e-mails. They could have told us about this. They could have flushed more of it out so it wasn’t so vague about what they were able to pass on, and yet it came tonight. It is interesting that you see that as a little suspicious as well.

CLAPPER: Well, I do, just given, you know, the track record of DNI Ratcliffe where he's used intelligence for political purposes so unfortunately. I have to say it, but you have to address what he says with some skepticism, and just an add-on to what Andy said about 2016, the Russians, we saw reconnoitered voter registration rules, which weren't all that hard to penetrate. We saw, I think, some 39 states, and they probably did it with all 50.

So they know how to do it, and I remember our speculating about what the purpose was, you know, for some future use. So just a historical note here. The other thing about the statement that the DNI made was that you just mention Russia and then went on to Iran. Well, Russia has been interfering in the run-up to the election all along, so that's not a startling revelation, and he didn't amplify that, and I would continue to believe that Russia poses far more of a threat, and I think we're going to see more of this. And as to the ascription that this somehow hurts President Trump, well, I can make the case that it helps him.

CUOMO: Well, certainly the Proud Boys stuff helps him because it is scaring people who were obviously sent messages because they didn't vote for him. What I found a little unusual … we have the e-mails. I reported on them last night with one of our reporters about what we had learned so far. No proof offered of the intentions to hurt Trump. Well, why not? You know that this is going to be something where people are only going to want to know what you can show. You showed the e-mails. Why didn't you show what was being out there that was bad for Trump? They have to know if you don't put out any proof, it smacks of politics.

CLAPPER: It really does. And I'll tell you from my own experience, having been through the process with Director Clapper in 2016, the intelligence community doesn't come out with an official analytical judgment along the lines of, you know, the Iranians are trying to hurt President Trump without rock solid evidence to prove that. And we got none of that evidence tonight from DNI Ratcliffe who has proven himself to be an overtly political influence on the intelligence process with the things that he's been, you know, involved in over the last couple weeks, releasing intelligence for political purposes.
So it's hard to imagine how the two instances he cited in his comments actually hurt President Trump. The Proud Boys issue that you mentioned, and also he said that there was indications that Iran had a video that implied that people could cast fraudulent ballots from overseas. That also supports a main line of President Trump's argument that the election could be replete with fraud. So I am not buying it at this point. I think we should all have a skeptical eye at that until we have proof.

CUOMO: You represent the two schools that were out there tonight, the two different institutions. And, Jim, not only did they not offer any proof, but there are two other suggestions. One, Wray did not echo – the head of the FBI did not echo what Ratcliffe said. He did not talk about the threat posed by Iran. And he doubled down, because he had said this before, on don't believe internet reports about votes not counting or the election being messed with. Now here's the weird part about that. We don't need Iran or Russia to plant that idea in our head. The president bangs on it all the time. What is more menacing to people's state of mind than their own leader telling them it's fraudulent.

CLAPPER: That's another unfortunate dimension of this is that, unfortunately, these foreign narratives agree with the president and vice versa. That's really unfortunate, but the bigger point here, Chris, to me is that it would really be nice if we could just take at face value when the director of national intelligence and the director of FBI come out of a quickly called press conference. It would be so nice if we could just accept what they said at face value and not spend all this time parsing and trying to analyze what's really going on. And that, to me, is a sad commentary.

CUOMO: And then some more sad commentary, "The Washington Post" reporting that the president is increasingly upset with Christopher Wray and thinking about replacing him as the head of the FBI. This can't help because I'm sure he didn't like that he wasn't in line with the DNI tonight. And he doesn't probably -- again, this is just crazy world that we're living in, but, yes, these words are about to come out of my mouth.

The president of the United States probably didn't like the head of the FBI saying not to worry about our election being fraudulent, your votes will count. That is a bizarre world, but that is trump's disposition. He wants people not to trust the count. What does that mean if he were to get rid of Wray over something like this? You don't think he would do it before the election.

MCCABE: I think it's unlikely he will do it before the election. But, really, anything is possible with this president at any moment. What do we know about this president? We know that he really doesn't like it when the people who work for him say things that he disagrees with or things that he finds to be uncomfortable. Chris Wray went on national television in his press conference and made statements that directly contradict the president's false narrative about voting fraud and electoral fraud.

That is not going to be taken well by this president. I can tell you from personal experience, he does not like it when people don't tow the political line that he prefers. So even if the election doesn't go his way, it is possible that he comes in after the election and removes the director simply out of spite.

CUOMO: Hey, Jim, last question and I'll let you guys go. Thank you so much. Do you think it makes it more or less likely that the president has been outspoken about wanting the attorney general to investigate Biden even after the DOJ passed on its latest investigation in terms of bringing any charges about unmasking and that him saying he wants director Wray at the FBI to investigate Biden, do you think that makes it less likely that it happens because it would look so overtly political?

CLAPPER: Well, exactly, and it seems to me it's counter-- from the president's perspective it's sort of counterproductive for his purposes to say things like that, which I don't -- you know, I just don't think are going to happen. In fact, the attorney general says so. So I don't understand -- well, like so many things I don't understand about the president, why he's doing that and how that helps his cause.