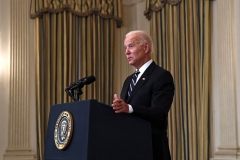 President Joe Biden delivers remarks on plans to stop the spread of the Delta variant and boost Covid-19 vaccinations at the State Dinning Room of the White House, in Washington, DC on September 9, 2021. (Photo by BRENDAN SMIALOWSKI/AFP via Getty Images)

(CNSNews.com) – Former FDA Commissioner Dr. Scott Gottlieb, who sits on the board of Pfizer, said Sunday that the downside of President Joe Biden’s vaccine mandate “in terms of hardening positions and taking something that was subtly political and making it overtly political could outweigh any of the benefits that we hope to achieve.”

“I think the downside of this mandate in terms of hardening positions and taking something that was subtly political and making it overtly political could outweigh any of the benefits that we hope to achieve. If you look at where we are right now, right now, 75 percent of adults over the age of 18 have had at least one dose of the vaccine. Most of them will complete the series,” Gottlieb told CBS’s “Face the Nation.”

“That's a very high number of people vaccinated owing to the good work of the Biden administration. We're not going to get above ninety percent. We don't even really reach ninety percent with childhood immunizations, which are mandated. So, we're going to get somewhere between 80 and 90 percent. I would state that we would have gotten to 80 percent just on our current trajectory in short order,” he said.

“Perhaps with a mandate on small businesses, eventually you get to something akin to 85 percent, but it's going to be slow, because this is going to get litigated. It takes OSHA time to implement regulations. You'll have to put in place guidance, give businesses a grace period and then figure out what the enforcement mechanism is going to be in,” Gottlieb said.

“In the near term, a lot of businesses that might have mandated vaccines are now going to sit on their hands and say, I'm going to wait for OSHA to tell me just how to do it and give me more political cover. So, in the near term, you could actually discourage some vaccination,” he said.

As to whether the U.S. has the testing capacity for weekly COVID testing of employees at businesses with more than 100 people who refuse to get vaccinated per Biden’s orders, Gottlieb said, “We would have the testing capacity to do it, but it puts a big burden on businesses to have to operationalize that and determine what they're going to do with the result.

“So, I think a lot of businesses are going to opt to try to force workers to get vaccinated if in fact this ever goes into effect. But again we are looking at a very long timeline here. Excuse me.

“Many were,” host Margaret Brennan said.

“Many already were,” Gottlieb agreed. “Many-- many were, exactly. Many-- many businesses are, and I think that the federal government's action to require federal employees to get vaccinated, which is probably well within their purview to do that in a function of federal readiness that gives plenty of political cover for more businesses, more private sector businesses to start to implement their own mandate.

“We should leave these decisions to communities, local communities and businesses to make assessments on what their risk is, what their settings are, how much precautions they can put in and whether vaccine requirements are an absolute necessary-- necessary to protect people in those settings,” Gottlieb said.

On the vaccine awaiting approval for emergency use for kids aged five to 11, Gottlieb said that “parents should look at this as a decision where there is some latitude in terms of what you do with your child, and you really should consult your pediatrician and have a conversation.”

“Parents have understandable concerns about putting any new product, new medical product in a child. It's not just this vaccine. It's any vaccine or any therapeutic, and I understand those concerns. This isn't a binary decision. It's not a choice of do I vaccinate my child or not? There's different ways to approach vaccination,” he said.

“You could go with one dose for now. You could potentially wait for the lower dose vaccine to be available, and some pediatricians may make that judgment. If your child's already had COVID, one dose may be sufficient. You could space the doses out more,” said Gottlieb.

“So, there's a lot of discretion that pediatricians can exercise, making largely off label judgments, but exercising discretion within the context of what an individual child's needs are, their risk is, and what the parents' concerns are. So, I would urge every parent to have a conversation with their pediatrician. Pediatricians are very good at counseling through these decisions, and I think that they could provide good objective advice to parents,” he said.

Gottieb said he expects the COVID vaccine to eventually be required as part of the childhood immunization schedule.