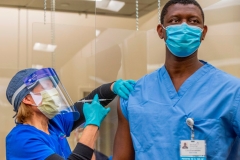 Nurse Susan McCarthy gives the very first vaccine shot to Lino Fernandes, an Environmental Services Aide, at Backus Hospital where 211 doses of the Pfizer BioNTech Covid-19 vaccine were delivered and being given to 30 hospital workers on the first day of vaccinations in Norwich, Connecticut on December 15, 2020. (Photo by JOSEPH PREZIOSO/AFP via Getty Images)

(CNSNews.com) - Former FDA Commissioner Dr. Scott Gottlieb predicted Sunday that the FDA could approve the Pfizer vaccine for children ages 5 to 11 in time for them to start getting vaccinated by Thanksgiving.

When asked whether it’s reasonable to assume that by Thanksgiving, we could see children fully vaccinated, Gottlieb told CBS’s “Face the Nation on Sunday, “I think that's certainly reasonable in terms of when this would be available. FDA is meeting October 26th, their advisory committee to discuss this application.

“Assuming that they authorize the use of the vaccine, CDC's Advisory Committee is going to meet on November 2nd and 3rd and make a final decision about who should be eligible for the vaccine, and assuming both of those events go well, and you get a positive recommendation out of both the FDA and CDC, this should be available almost immediately after the CDC makes a final recommendation and be available in pharmacies and perhaps pediatricians' offices as well,” he said.

“Pfizer plans to ship this vaccine in smaller vials and also smaller trays that could make it more accessible to more pediatric-- pediatric practices,” said Gottlieb, who sits on the board of Pfizer.

Host Margaret Brennan pointed to the results of a recent CBS poll that said a third of parents say they will vaccinate their five- to 11-year-olds right away, and a quarter of them will wait and see.

She asked what Gottlieb will be looking for in the language from the CDC when they explain this to the public.

“I was actually encouraged by the results of that survey. There's a lot of parents like me that as soon as the vaccines available for their children are going to go out and get their kids vaccinated, that see the benefits of vaccination. There's a lot of-- parents that still have a lot of questions around vaccination,” Gottlieb said.

“I think for them, they should have a conversation with their pediatrician to try to get comfortable with the idea of vaccinating kids. We now have the opportunity by the availability of this vaccine to more fully vanquish this virus and protect a broader swath of the population in terms of what CDC is likely to do," he said.

"I think CDC is likely to take a very cautious approach in children ages 5 to 11, in part because they're at less risk from COVID, in part because this is a new vaccine. We're still collecting data about it and it's a novel virus," the former FDA commissioner said.

"And so, there's still some things we don't know, but I think there's a lot of information available. It certainly makes me confident about vaccinating my kids, and for those parents are still have a lot of questions. I would urge them to have a discussion with their pediatrician about the pros and cons of vaccination," he added.

Gottlieb said that for kids six months old to four years, “which is still in development, it's going to be even a smaller dose, one tenth the dose that's used in adults.”

He said that approval for that set of the population is “not really far down the line.”

Not really far down the line, I think there is some indication based on the experience with this vaccine where FDA asked for additional information, as well as some feedback that Pfizer has gotten from the agency, that the clinical trials in kids ages six months to two years and then two years to four years.

So, it's two different trials, could be a little bit larger and a little bit longer in terms of the follow up period that's required and that could push it into 2022. Previously, we had talked about trying to have that data available before the end of this year, which could have prompted an authorization, perhaps by the end of the year, at least in kids ages two to four. I think it's more likely that it slips into the first quarter of next year, at the very least, but not too far into next year.

Ultimately, this is going to be discussed at the advisory committee that FDA has on the 26th. So, a final recommendation about how large those trials need to be and how long the follow up period needs to be is going to be made at that point. I think, look, the agency has been moving cautiously here, but you know, with speed recognizing the importance of getting a vaccine available for children.

I think ultimately, if we can derive more information, it gives more people confidence about using this vaccine and puts CDC in a better position to make a more confident recommendation. Ultimately, the public health is going to be served better by that, even if it means that it ends up slipping a month or two. So that might be the outcome here.

When asked how long it will be before elementary school students are being mandated to take the COVID vaccine, Gottlieb said, “I think it's a very long way off.”

Certainly, CDC is going to look at children ages 12 to 17 differently than 5 to 11 and the older kids, the high school kids and middle school kids, do seem to get into trouble more with COVID. It's harder to control in those settings, so that's going to be considered separately, but even that's, I think, a multi-year effort. I don't think that it's going to happen any time soon.

CDC is going to want to see the post-pandemic experience, how much virus is going to be circulating after the pandemic and how much of a risk it poses to children. They're also going to want to collect a lot more long-term data in kids, and so, you know, 12 to 17 could be a couple of years away, perhaps a little longer. I think five to eleven is even longer than that.

You're going to want to get more experience in those children, and that's barring anything unexpected. I mean, if we do get a new variant and this becomes very hard to control in children, if we get something that is causing more problems in kids, you could see an earlier decision, but given our current trajectory, where we are, that we are starting to get control of this virus, I think that CDC is going to act very cautiously.

And just final point on this, if you look historically at past vaccines, the time between when they're licensed and when CDC incorporates them into the childhood immunization schedule is a multi-year effort. HPV was first licensed in 2006 and wasn't recommended until 2016.

Hepatitis A was first licensed in 1995 and wasn't recommended until 2000. So, you've seen it be a multi-year effort between when these things get licensed initially and when CDC ultimately puts them into the recommended schedule for children.