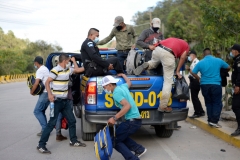 Guatemalan police officers return illegal Honduran immigrants to their country, in El Florido, in the Honduran department of Copan across their border, as migrants wanting to reach the United States start gathering with the hope of crossing the border into Guatemala to begin the first US-bound caravan of the year, on January 15, 2021. (Photo by JOHAN ORDONEZ/AFP via Getty Images)

(CNSNews.com) – Apprehensions at the border have increased by 300 percent during the same time period last year, creating a crisis at the border, and it’s not by accident – it’s “by design,” former ICE Acting Director Tom Homan said Wednesday.

“Look, they don't have to admit it's a crisis. The American people can do math. This month they'll have over 100,000 apprehensions, which is almost a 300% increase over the same time period last year. When you increase illegal apprehensions by 300%, that's a crisis, and the amount of children that are currently custody of U.S. Border Control is an all-time high. If there is a crisis, they're ignoring it,” he told Fox Business’s “Mornings with Maria Bartiromo.”

“The reason they don't want to admit it, they created it. We had the most secure border we ever had under President Trump. They slowly picked it apart over a two-week period. Now we have a crisis that they created. This is not by accident. This is by design,” Homan said.

He said the Biden administration is “doing two things that really hurt.”

“First of all, they basically abolished ICE. The rest of the world knows that ICE has been crippled. Ninety percent of their authority’s been taken away, so there's no interior enforcement, so if you can get by Border Control, no one’s looking for you, because ICE is only supposed to target those convicted of aggravated felony, which is a very small percentage,” Homan said.

“The other of thing they did is end the Remain in Mexico program. Here's the facts that they don't want you to know. Eighty-eight to 90 percent of Central Americans who claim asylum at the border never get relief from the U.S. courts, because they either don't show up or they don't qualify. That’s nine out of 10 Central Americans commit asylum fraud, and if you look at Homeland Security -- that's available on the DOJ website,” he said.

“What's your penalty? They’re going to get amnesty under the new Biden amnesty plan. Those are the two biggest mistakes the administration has made - not incompetence, not that they made a mistake. This is by design,” he said.

He pointed out that DHS Secretary Alejandro Mayorkas was deputy secretary and President Joe Biden was vice president during the border surge in 2014 and 2015.

“They know how we stopped the border surge back then. We did it by building detention centers and detaining people, not by seeing how quickly we’re going to release them. We did it by allowing ICE to execute final orders issued by judges to have the people removed, because when people are quickly removed, the border numbers went down, so the two things they knew that worked,” Homan said.

“They're doing the opposite now, which is the reason I say this is by design, and rather than taken enticements away like we did back then, they just keep talking more and more enticements, more amnesty, more DACA, more health care, free healthcare, so they're doing the complete opposite of what they've done to solve the crisis,” he said.