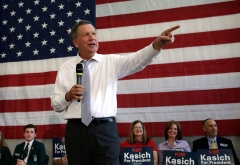 (CNSNews.com) – Former GOP presidential candidate and former Ohio Gov. John Kasich, who endorsed President Joe Biden, was critical of the president for not doing what he said he would do – bring both parties together and pass the infrastructure bill, opting instead to cater to the far left members of his party.

In an appearance on CNN’s “The Situation Room with Wolf Blitzer” on Thursday, Blitzer asked, “When you look at all these economic challenges, especially rising prices right now, inflation, how much trouble does this spell for President Biden?”

“Well, it’s early still, Wolf, but look. They can't spin this. They've got to acknowledge they have real problems. Here I think is the fundamental problem, Wolf. Joe Biden didn't run for president to try to remake America or to be LBJ or FDR. He ran for president to bring us together, to stop the name calling and the fighting,” Kasich said, adding:

Then Mike Donilon, who is one of his closest friends and senior advisers, wrote a memo and he said they should pass the infrastructure deal, not the big thing they talk about, but the roads and the highways and that the two parties should meet in the middle, and that will appeal to swing voters.

So look, I endorsed Joe Biden. I expected him to be able to get people in a room -Republicans, Democrats - and work things out. They've had two tries. The first one was the stimulus package where they had it their way and the Republicans, they never met.

Then we had the infrastructure package where Republicans helped, and then the president comes out and says we're not going to do that one until we get the other one. Frankly, Wolf, honestly, you've covered Washington for a long time.

For those Democrats in this party who are extreme and out there, he needs to get rid of them and appeal to Republicans to take their place to get the votes to get something done that helps Americans, the infrastructure package - wildly popular, doing something about the rising cost of prescription drugs. They can work that out.