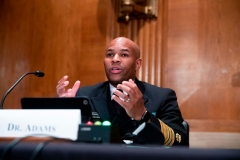 (CNSNews.com) – Former U.S. Surgeon General Dr. Jerome Adams, who served during the Trump administration, told CNN on Thursday that people should be considered as fully vaccinated against COVID-19 once they’ve received three doses of Pfizer or Moderna or two doses of Johnson & Johnson.

He said that sports leagues are doing “a fantastic job of surveillance testing” and that the rest of the country should follow their example.

Adams said that you’re seeing breakthrough cases in professional sports because a lot of them were vaccinated with the J&J shot, “and they’re mostly asymptomatic and mild, but they can still cause an outbreak.”

“As you mentioned, other environments should be paying attention to what's going on in pro sports. They are a window into the community spread. Kudos to the sports leagues, because they are doing a fantastic job of surveillance testing, and the rest of the country, we're driving a car down a dark road with the headlights off while looking in the rear-view mirror. We hit a bump and we say, ‘what was that?’ That's our surveillance system right now for COVID,” Adams said.

“In the NFL and the NBA and these sports leagues, we have a higher proportion of J&J recipients than anywhere, and it's a good vaccine, but it needs to be more than one dose, and you’re seeing these breakthrough cases largely, because you’ve got a lot of J&J folks who are well out from their first dose, and they’re mostly asymptomatic and mild, but they can still cause an outbreak,” the former surgeon general said.

Adams said he hopes that schools won’t have to keep shutting down because of COVID cases.

“What we need is a well-articulated long strategy. We can’t keep chasing variants forever. What I think will happen is that after everyone gets their third dose – and this always should have been looked at as a three dose series for mRNA, two dose for Johnson & Johnson - that we will settle into a yearly pattern, the same as we do for flu. We’ll look, and we’ll say, ‘okay, how has this changed in the last year, and do we need to issue a new vaccine for this year?’” he said.

“I think we have gotten to the point where enough people have had the opportunity to be vaccinated that you’re going to see some tradeoffs, and we’re just gonna say that we’ll have to accept some spread in between the times that we issue that yearly update, but the real fear, and I want people to understand this, is we still have under 5 who can't get vaccinated,” Adams said.

“We still have immunocompromised people, and so now the government is trying to do that tradeoff of protecting the unvaccinated and the immunocompromised versus what appears to be a shifting towards milder spread. Milder disease can still be deadly if it's much more contagious. That’s what we’re worried about with Omicron, particularly hospitals at their wits’ end, at capacity,” the former surgeon general said.

Adams said that the both the Trump and Biden administrations wanted to declare victory over COVID, but the virus won and will be here for a while.

“It’s going to be here for a while, but we have the tools to live with it, and we need a plan for surveillance testing,” Adams said. “We need a plan to be able to utilize these oral antivirals, these wonderful drugs that can help us, but they can't help us if we can't identify disease.

“We need to change the definition of fully vaccinated to three doses so that people can all get to where they need to be baseline, and we need to help people understand, it’s probably going to be like the flu shot most likely for a while. Once every year, you’re probably going to need an update until we can get the world to a baseline level of immunity level from a prior infection or from a combination of prior infection and vaccinations,” he said.

The CEOs of American Airlines and Southwest Airlines testified before Congress on Wednesday, claiming that people don’t need to wear masks on airplanes.

The former surgeon general called their comments “irresponsible” and “reckless.”

“But I want people to understand how that happened. I have testified before Congress a lot. There's a lot of theater there. They are trying to set you up to get you to say what you want to say, and you come in with your talking points, and the airlines’ talking points appropriately have been that the cabin is one of the safest places you can be with the air exchange, but what they didn’t tell you is these were on mannequins who weren't pulling off their masks to eat,” Adams said.

“These were considering people on the plane who weren't by choice unvaccinated. You’ve got people under 5 who are unvaccinated, and we also need to talk about the fact that many of these airlines aren't running these filters while you’re sitting there on the ground. So you can be on the plane for half the time without the filters running, and so when you're on a plane, you need to wear a mask,” he said.

“The Southwest CEO, the American Airlines CEO need to come out and say, look, if you want to travel then we need to have these mask mandates on planes, because they create a safe environment. They create confidence. These folks are making record money right now because of these mask mandates. I was disgusted when I heard that, but I understood how they were set up, how they were led into making these comments, and they need to be more careful next time,” Adams said.