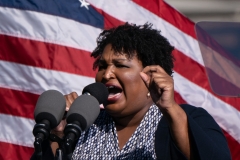 Former US Representative and voting rights activist Stacey Abrams speaks at a Get Out the Vote rally with former US President Barack Obama as he campaigns for Democratic presidential candidate former Vice President Joe Biden on November 2, 2020, in Atlanta, Georgia. (Photo by ELIJAH NOUVELAGE/AFP via Getty Images)

(CNSNews.com) – Georgia Gubernatorial candidate Stacey Abrams wouldn’t say on Sunday whether she supports abortion up to nine months, saying instead that “abortion is a medical decision.”

During an interview on “Fox News Sunday,” she was asked whether she supports any limitation on abortion and whether she thinks women should have the right to have an abortion all the way up to nine months.

“I believe an abortion is a medical decision. I believe that should be a choice made between a doctor and a woman and in consultation with her family, but I think the challenge that we have is that we keep putting this in a political space,” Abrams said.

“This is a medical decision, and the medical choices that should be made should be governed by what is best for that woman and what is best at the suggestion of and advice of their doctor,” she said.

“I asked you about, when you see -- you know, I asked you if you believe in it all the way up to nine months. So, I'm just asking you-- you're talking about caring about the lives of women. I'm just asking, at what point do you start to care about the life of that baby, that baby girl, in this - in some cases?” host Martha MacCallum asked.

“What I would say is that it is a medical decision. I don't know of a single woman who reaches the stage where this decision is easy. That is not the case, and so this is a medical conversation, and while we are absolutely compelled to have these difficult conversations, they should not be political ones,” Abrams said.

“I should not be making decisions without having true understanding of the facts, nor should any other political leader. This is not a political issue. This is a medical issue,” she said.
“OK. So I'm going to - I'm going to take that as up to nine months in some cases depending on the woman, correct?” MacCallum said.

“That is not what I - that is not what I said. I said this is a medical decision, and the medical decisions that have to be made have to be made in context. This is a specious approach to try to denude the entire argument, and the reality is, abortion and reproductive care is personal and it is singular and it should be made between a woman and her doctor. I do not have either the experience or the capacity to know what is happening with others,” Abrams said.

She also said that she rejects the notion that the Georgia Life Law passed by the Georgia Legislature in 2019, which bans abortion after six weeks or when a heartbeat is detected, is the “will of the people.”

“This is a political decision made by the narrowest of margins and done to satisfy an even narrower constituency. A majority of Georgians rejected the notion of overturning Roe v. Wade. They reject this bill, and this is not the law that will be safest for Georgia women,” she said.

“What is more concerning to me though is the notion that our constitutional rights and bodily autonomy that women for 50 years have come to rely on will now be subject to state by state imprimatur rather than being governed by a federal notion that no matter who you are, no matter where you live, we live in the United States, and our ability to control our bodies should be sacrosanct regardless of state lines,” Abrams said.

Abrams was asked to weigh in on the words of Virginia Lt. Gov. Winsome Sears who said that in 2019, “15,000 plus abortions were done, 46 percent of them were done by Black women.  Now, if the KKK had said, we will pay for every Black woman to have an abortion who wants one, we would say to ourselves, wait a minute, something's up. Why don't they want us to have our babies? But you see that we -- we don't understand what's going on, and so, we're losing so many Black lives that matter.”

When asked whether Sears “has a point in terms of losing so many black lives that matter,” Abrams said, “I think that's a very specious agreement that's used to cloak what is, I think a deeply disturbing approach to this conversation. In fact, during my tenure in the legislature, I beat back a bill design to deny access to this medical decision using race as a divisive tactic, and I reject that.

“Black women in Georgia face the highest maternal mortality rate. They are three times more likely to die. We know that Black women are the most likely to be underserved by their medical care, and we know that sometimes the choice that they need to make medically, economically and personally is to have an abortion,” she said.

“We cannot cherry-pick when we pay attention to the lives and safety of women, and that is the deepest challenge that we face here in Georgia,” she added.