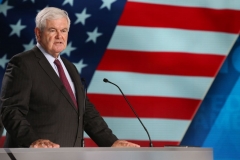 (CNSNews.com) – H.R. 1, the “For the People Act,” should instead be called the Professional Politicians Corrupt Election Act, because it doesn’t require the voting rolls to be purged of dead people, and you won’t know who’s voting, former House Speaker Newt Gingrich told Fox Business’s “Mornings with Maria Bartiromo” on Friday.

“The Democrats have got these fancy names. H.R. 1 should be called the Professional Politicians Corrupt Election Act because that's what it is. It's an effort to create an environment really based on the history of Tammany Hall in New York, Philadelphia machine, Chicago, what the California Democrats have evolved. This is as an effort to say you’re not going to know who’s voting,” he said.

“There won't be a requirement to purge the rolls of people who are dead. There’s not going to be any ability to control for example the Service Employees Union, which might be servicing a nursing home, going around to all of the senior citizens in that home and giving them a chance to vote with the person who takes care of them picking up the ballot,” Gingrich said.

“Now, you know just human nature that that creates a biased environment and an environment frankly of some fear and some intimidation. Yet this bill on every front they have managed to take a position that the American people oppose, and I think it is madness what they're doing, and I think the number of marginal Democrats -- the last two times the Democrats had the White House, we picked up 54 seats in 1994,” he pointed out.

“We picked up 63 seats in 2010. I think they're setting themselves up for that kind of a disastrous election because they're trotting all of their marginal members out and getting them to vote for things that they will not be able to defend when they go back up. Who wants to have the government paying for politicians? This bill does. Who wants to have 16-year-olds voting? This bill does. You go right down the list,” Gingrich said.

He also pointed out that there’s a stricter standard for recalling California Gov. Gavin Newsom than there is for voting in the general election.

“The recall petition in California actually requires that you be able to identify every single signature. So we have a stricter standard for recalling the governor of California than we have for voting in a general election. But look, if you are a liberal Democrat, you figure the younger they are, the less they know, the more likely you are to get their vote,” Gingrich said.

“And so this is a deliberate effort to flood the system, and I think it's going to -- I think it will be stopped in the Senate, and I think also it's an enormous overreach to go out there and say to all 50 states that Uncle Sam sitting in Washington will now dictate -- it's kind of funny,” he said.

“So the Nancy Pelosi team in Washington will dictate how you're going to vote while the California internet giants dictate what you're allowed to say and then the they're going to think that's a free society. I think people will reject it,” Gingrich added.

On the issue of re-opening schools, Gingrich said that the teachers’ union is “the number one ally of the Chinese Communist Party,” because of the damage being done to U.S. education with public schools being closed for so long.

“The number one ally of the Chinese communist party in the United States is the teachers’ union. The damage we are doing to a generation of children because of the teacher union's terrible attitude and terrible work rules is in fact potentially going to make it impossible for us to compete with China,” he said.

“I mean they're working very hard. They're very disciplined. They require people to learn in school. They actually are investing rationally. Meanwhile, we are totally mired down in a political disaster. We have public schools in which not a single student, not one, has passed any kind of exam. We now have the kids not even going to the schools, and we think we're going to compete with China?” Gingrich said.

“I mean, this -- we need a serious national discussion of whether we want to be a serious country and we want to be the leading country in the world, or whether decaying into corruption and ignorance is an acceptable American future, because that's what we're getting. You look at the damage done to the current generation of children, it's unbelievable,” he said.