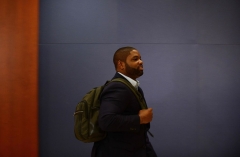 (CNSNews.com) – The federal government does not have the authority to censor free speech through social media companies in its quest to combat misinformation on COVID vaccines, Rep. Byron Donalds (R-Fla.) said Wednesday.

“The problem is Democrats don’t want anybody else to have the ability to speak. Let's be very clear. If the White House actually thought it was okay for Americans to speak their mind on a social media platform which [White House Press Secretary] Jen Psaki says is a public platform, you wouldn't have these issues. They don't want anybody else to be in the public square, so to speak, speaking and putting out information,” he told Fox Business’s “Mornings with Maria Bartiromo.”

“Whether the White House agrees with it or not, Maria, frankly, whether you and I agree with it or not, Americans have the right under the First Amendment to speak. You cannot have the president of the United States, any member of Congress, any governmental agency basically get in the way of that, try to go through a private company through the back door to squelch that speech,” the congressman said.

“It is almost pretty clear to me that's what the White House has done. What's important for Congress to do now is get the information about whether the White House spoke to them, what did they talk about, how frequently were they talking to the social media companies, and what the impacts of that are,” Donalds said.

“This is a serious constitutional issue that Congress has a responsibility to make sure that we investigate, because this is the freedom of speech for the American people. It must never be infringed,” he said.

“As ridiculous as Joe Biden's comments on voting rights with respect what's going on in Texas or Georgia or my home state of Florida, he's free to say what he wants, even if it's stupid. So I would never stop him from saying it,” the congressman said.