GOP Congressman: ‘What’s Happening Here Is an Assault on the Disposable Income of Americans’ 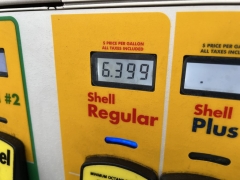 (CNSNews.com) – Rep. Dan Meuser (R-Pa.) accused President Biden on Tuesday of launching an assault on the “disposable income of Americans,” by not changing his domestic energy policy and letting gas prices continue to climb.

As CNSNews.com previously reported, President Joe Biden said Monday that the United States is “going through an incredible transition” when it comes to the gas crisis, which will make the world “less reliant on fossil fuels when this is over.”

“Well, at least he's telling the truth this time. He stated he was going to go after the fossil fuel industry during his campaign. Now they've been telling us this is all because of Putin, and clearly what's been done is an assault on our domestic energy. I'm from Pennsylvania,” Meuser told Fox Business’s “Mornings with Maria Bartiromo.”

“We've got the Marcellus Shale under our feet. They're sending people to Venezuela, sending groups to Venezuela to buy oil and gas when we have it right under our feet. So what's happening here is an assault on disposable income of Americans. It doesn't make any sense, and they're going to pay the price for it. It’s awful,” he said.

Monica Crowley, host of “The Monica Crowley Podcast,” said Biden is unwilling to recognize that high gas prices are hurting the American people and he needs to shift priorities, because the White House does not “recognize any of these policies as missteps.”

“You can't really make a socialist omelet without breaking a few eggs. President Biden used the word incredible to describe this energy transition. They think this is fantastic, and if the American people need to suffer pain at the pump, $6 a gallon, maybe upwards of $8, $10 a gallon, well that's what you need to pay to get their ruinous Green New Deal and fundamentally transform the U.S. economy,” she said.

“Meanwhile we have no permits being issued. We have no drilling taking place. We're prohibited on federal lands. Natural gas is also under the gun. Meanwhile, it's half the carbon. It's the reason the U.S. has had less carbon emissions for any industrialized country over the last two years,” Meuser said.

“Look, and what Monica just said is absolutely true. That's the goal, sadly, to destroy the United States domestic energy causing all this panic and economic problems with our inflation in the U.S., but worldwide, here in Europe. We're at Davos, as you know. By the way, everybody misses you very much, Maria,” he said.

Host Maria Bartiromo asked Meuser, who is in Davos, Switzerland attending the World Economic Forum, what the forum attendees had to say about people everywhere having to pay more for gasoline, given that one of the themes of the summit is the green agenda.

“You know, we have some that are here that are kind of elitist that don't -- that are victims of wishful thinking and were not addressing the issues at hand that most affect the American people and the consumers in Europe, and we also have a lot of realists here as well that are understanding the importance of American strength from a military as well as economic standpoint,” the congressman said.

“We also have the continued threat and opposition, adversarialness of China. That's one thing that's frankly not being talked about much, but a big issue here is certainly the Ukraine. Europe is very, very concerned about it. Part of my trip, I was in Moldova, from refugees to the potential of being invaded by good old Putin to the energy shortages and food. There's food issues,” he said.