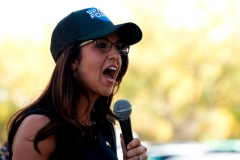 (CNSNews.com) - Rep. Lauren Boebert (R-Colo.) called out Rep. Sean Patrick Maloney (D-N.Y.) on Thursday for implying that she gave a tour of the U.S. Capitol building to “insurrectionists” a day before the Capitol riots.

“Yesterday, on national television, Congressman Sean Maloney made false and baseless conspiracy claims about me that led to death threats and hundreds of vile phone calls and emails,” Boebert said in a statement.

“His comments were extremely offensive, shameful and dangerous. There was not an ounce of truth to anything he claimed about me. His allegations are an embarrassment to the House of Representatives and he should correct his false assertions on the record as soon as possible," she added.

According to the press release, based on “Maloney's lies and those of his colleagues, some have even gone so far as to accuse” her of “conspiring with the criminals that attacked the Capitol on January 6th.”

“Extremists that believe this rhetoric have posted photos of Rep. Boebert with people she doesn’t know at the Capitol Building in Denver, Colorado, following a rally from more than a year ago and falsely claimed these were people that she gave a U.S. Capitol tour to on January 5, 2021,” the press release stated.

In an interview Wednesday with MSNBC’s “Deadline: White House,” Maloney said he didn’t have firsthand knowledge about a member of Congress giving a tour to insurrectionists, but he spoke to a member who saw it personally.

Maloney didn’t name Boebert in his interview as the person who gave the tour, but he said “there are some of our new colleagues, the same ones of course who believe in conspiracy theories and who want to carry guns onto the House chamber, who today have been yelling at Capitol police” for requiring them to go through a metal detector.

“I saw it earlier when I went to vote, shoving Capitol Police, who a week ago were risking their lives to save ours. This conduct is beyond the pale, and it extends to some of this interaction with the very people who attacked the Capitol, and that's why the issue of making sure every member of Congress now goes through a metal detector, which has never happened before, is so important for the security of the inauguration and for our proceedings,” Maloney told MSNBC.

“All of Rep. Maloney's implications are categorically false. Congresswoman Boebert complies with all applicable firearm laws and regulations. Rep. Boebert did not conspire with criminals that attacked the U.S. Capitol on January 6th. Congresswoman Boebert never gave a tour of the U.S. Capitol to any outside group or ‘insurrectionists,’” Boebert’s press release stated.

“In fact, the only people she ever had in the Capitol with her were her young children, husband, mom, aunt and uncle. Her mother was the only one of those family members in Washington D.C. on the 6th. During the riots, the Congresswoman's mother was locked in a secure location, not in the U.S. Capitol, with her staff and never left their sight,” it stated.

Boebert also sent a letter to Maloney, calling his comments extremely offensive, shameful and dangerous,” adding that his “carelessness led to multiple media stories and viral tweets spreading this disinformation.” She said that the congressman’s refusal to check his facts or even talk to Boebert prior to the interview led to her office receiving death threats.

Maloney replied to Boebert on Twitter, saying, “Um, I’ve never said your name in public, @RepBoebert. Never. Not once. (If you’re going to be a gun nut, you probably shouldn’t go off half cocked.) I’ll tweet the transcript so you can see...but that might be like ‘a fact’, so might not help you.”