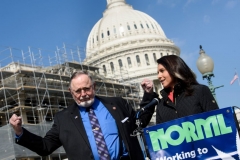 (CNSNews.com) - Rep. Don Young (R-Alaska) cautioned Tuesday that there can’t be an immediate discontinuation of fossil fuels, and anyone who suggests otherwise is “smoking pot,” which he pointed out is legal in his home state.

Speaking at the Senate confirmation hearing for Rep. Debra Haaland (D-N.M.) to be interior secretary, Young pointed out that his state of Alaska lost jobs because of President Joe Biden’s executive order on climate change.

“I have a lot at stake here. I am an oil-producing state too, and we lost a lot of jobs - not because of Deb - we lost them because of the president signing an executive order, really a hardship,” he said.

“Anybody who thinks you’re going to cut off fossil fuels immediately is smoking pot. That’s legally in the state of Alaska, by the way, but I’m just saying they’re not realizing only 19 percent of a barrel of oil is used for propulsion,” Young told the Senate Energy and Natural Resources Committee.

“The rest of it, if you look around this room, including that rug, all kinds of different uses. Coal and oil molecules are the biggest structure elements we have in our society today,” the congressman said.

“I know this is being done because of climate change. I recognize that, but that won’t solve the problem. If we’re going to do this, we have to work into it gradually. We’ll find out all the sources of energy may not be the best in the world like they did in Texas,” he said.

Young spoke in support of Haaland’s confirmation as interior secretary, saying she’s someone who will listen and reach across the aisle.

“She will listen to you. She may not change, like she and I do not agree on carbon fuels. You know that. We’ve said this before, but it’s my job to try to convince her that she’s not all right and her job to convince me that I’m not all right. That’s the most important about the secretary,” Young said.