WH: We Are Considered Guilty and Have to Prove Our Innocence 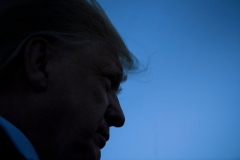 (CNSNews.com) – The House voted 232 to 196 along party lines in favor of a resolution to set rules for an impeachment inquiry into President Donald Trump.

In an appearance on Fox News’ “Outnumbered Overtime,” White House Press Secretary Stephanie Grisham was asked whether she sees the vote as progress in the impeachment probe or still not quite due process for the president.

“It was never due process for the president of United States,” Grisham said. She said it’s clear that House Speaker Nancy Pelosi (D-Calif.) has lost control.

“Phase one of this impeachment sham was all behind closed doors. Now they’ve begun moving to phase two, which is supposed to be public. I'm wondering, from the first phase are we going to be able to see any of the transcripts or know what was said? Is any of the first phase going to come to light?” the press secretary asked.

“Are we just starting phase two? We don't know the rules yet for the White House. Are we going to get to even be involved? I don't think so. It's my understanding that we are not going to get to defend ourselves until he goes to the Judiciary Committee, and that's not how it works in America. In a court of law, you’re innocent until proven guilty,” Grisham said.

With the Democrats, Trump is considered guilty and has to prove his innocence, “which won’t be a problem,” the press secretary said, “because we already released a transcript showing the president did nothing wrong.”

Grisham said she keeps seeing Democrats on the House floor “talking about this being for the good of the country.”

“The president just authorized the kill of the founder and leader of ISIS. That’s what's good for the country. This president is for country and we will keep working, and they can continue to do their sham,” she said.

When asked how the messaging changes now that the impeachment inquiry moves from process to substance against the president, Grisham said, “Honestly, I don't think the messaging changes. We released that transcript weeks ago. If anybody who wants to look at the transcript, will see that there was nothing was done that was wrong.

“The Ukrainian government has said there was no pressure there. Aid money was released. The message is simple. It's what we've been saying. The president had concerns about releasing foreign aid, as he does with many countries, until there is no corruption and to make sure that burden-sharing with other countries happens. Ultimately, the aid was released. It had nothing to do with quid pro quo. The president did nothing wrong. That's always been our message,” she said.