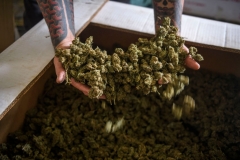 (CNSNews.com) - In a vote of 220 to 204, the House on Friday passed a bill that would legalize marijuana and eliminate criminal penalties for those who distribute or possess it.

Three Republicans voted in favor of the Marijuana Opportunity Reinvestment and Expungement (MORE) Act, and two Democrats voted against it.

Reps. Matt Gaetz (R-Fla.), Brian Mast (R-Fla.) and Tom McClintock (R-Calif.) all voted in favor of the legislation. Reps. Henry Cuellar (D-Texas) and Chris Pappas (D-N.H.) are the only Democrats who voted against it.

When asked Friday whether President Joe Biden supports the MORE Act, White House Press Secretary Jen Psaki said, “First, let me say that as the president said during the campaign, ‘Our current marijuana laws are not working.’

“He agrees that we need to rethink our approach, including to address the racial disparities and systemic … inequities in our criminal justice system, broaden research on the effects of marijuana and support the safe use of marijuana for medical purposes,” she said.

“We look forward to working with Congress to achieve our shared goals, and we’ll continue having our discussions with them about this objective,” the press secretary added.