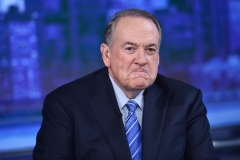 (CNSNews.com) - Former Arkansas Gov. Mike Huckabee had some advice for anyone connected with former President Donald Trump who might be investigated: identify as Hunter Biden.

“I do have a strategy that I would suggest that everyone in the Trump orbit use. Any time you're investigated, simply say, I identify as Hunter Biden, because if you can do that, you’ll never be investigated. Nobody will ever lay a finger on you. Nobody will care what you can do. You can do things in broad daylight, and the FBI and everybody will turn a blind eye and let it go. So just take the simple advice, identify as Hunter Biden,” Huckabee told Fox News’s “Hannity.”

The former governor said that Vice President Kamala Harris is performing so badly with the border situation that she makes President Joe Biden look good.

“I have to wonder, maybe they wanted Kamala Harris in this job, because she actually makes Joe Biden look competent,” he said.

Huckabee also said that he thinks President Joe Biden “was sucker punching” Rep. Maxine Waters (D-Calif.) on Wednesday when he encouraged her to run for Senate, because “she’s 83 years old, and she’ll never be defeated into her House district, but in a statewide election it’s a good way to send her home.”

“Maybe he really is trying to say, ‘Run, Maxine, so that we can finally get rid of you,’” the former governor said.

Laura Trump, the former president’s daughter-in-law, said that “everything the Democrats touch turns into a dumpster fire.”

She pointed to the southern border as proof, and that all Biden needed to do was to keep Trump’s immigration policies in place and the problem would have been solved.

“Instead, they have to do the opposite of what Donald Trump wanted to, because everything he did was bad, right? Wrong. We had a country that was flourishing under President Donald Trump. We have a secure border, more jobs than we had people to fill them, the lowest unemployment in many respects in the history of America,” Laura Trump said.

“We had energy independence, net energy exporter, we were respected around the world again. In less than six months, gone, wiped off the map. They hate Donald Trump so much, sadly, to the detriment of the American people,” she added.