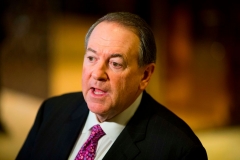 (CNSNews.com) – Former Arkansas Gov. Mike Huckabee on Monday asked how we can “expect to keep America-hating, anti-Semitic terrorists out of our synagogues when we can't even keep them out of Congress.”

Huckabee was referencing the hostage standoff at a Jewish synagogue in Dallas, Texas, during which a terrorist took four people hostage before being killed.

The FBI was criticized for saying that Malik Faisal Akram was “singularly focused on one issue, and it was not specifically related to the Jewish community.” They said that Akram had spoken repeatedly about Aafia Siddiqu “a convicted terrorist who is serving an 86-year prison sentence in the United States on terrorism charges.”

“I don't want to take anything away from the FBI agents who helped end the crisis, but let's give credit where credit is due. The real hero here was that young rabbi who literally put his life on the line and took action throwing the chair in order to give those other parishioners an opportunity to get out,” Huckabee told Fox News’s “Hannity.”

“He very well could have died because that shooter could have decided, okay, he has allowed them to get away, he’s not going to get away. He is a hero. He really is,” the former governor said.

“And Sean, I’ve got a question maybe I’d love to ask the FBI. How are we going to expect to keep America-hating, anti-Semitic terrorists out of our synagogues when we can't even keep them out of Congress? And a lot of this behavior is justified by people who sit in Congress today, and that is a tragedy,” he said.

Huckabee said that “the one thing that we need to be grateful for is they did not blame this on climate change or some group of right-wing people.”

“I want to make sure you understand when I was talking about America-hating anti-Semites, I’m talking about the people who are elected to Congress, not people who show up to protest,” the former governor said.

“They are our friends. They are our brothers and sisters, and they are under attack from these crazy radicals from across the world,” Huckabee said.