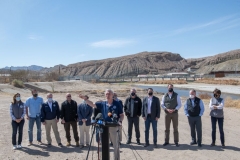 (CNSNews.com) – The Biden administration cannot account for 44 people on the terror watch list who crossed the southern border, and it took two weeks for them to apprehend one who traveled to Florida, Rep. John Katko (R-N.Y.) told Fox News’ “America’s Newsroom” on Wednesday.

This comes as the FBI uncovered a plot involving an Iraqi man with ties to ISIS, who entered the U.S. on a tourist visa during the final months of the Trump administration and plotted to sneak other ISIS members across the southern border to kill former President George W. Bush.

Katko, who serves as ranking member of the House Homeland Security Committee, said the plot was “quite involved.”

“I know that there was substantial amount of chatter that was intercepted on Whatsapp and other internet chains and Part of the plot included like you noted trying to get people to come across the southern border. What’s really important about that is the bad guys know the southern border is open and they're figuring out ways to exploit it,” the congressman said.

“It took us a year to get the statistics from the Department of Homeland Security about the number of people on terror watch list that were seized at the border last year. There’s up to 35 now. So those are the ones we seized. It stands to reason that others have gotten through and it also now been confirmed that bad guys are trying to use the southern border to get bad people into this country,” he said.

Katko said that the fact that the ISIS terrorist was thinking of exploiting the southern border in such a way is his “worst fear” about the Biden administration’s border policy.

“That's like my worst fear about this administration's misplaced border policy or lack of a border policy is that they're looking at the southern border as wide open, and if bad guys are coming across, it’s a matter of time before something like this was going to happen, God forbid, and thank God the agents did a great job of interrupting the plot, but make no mistake about it, there’s probably others bubbling up too, and we’ve got to be vigilant,” he said.

“I don't know what it’s going to take for this administration to wake up and realize that their border policy is a mistake and it’s making our country much less safe,” the congressman said.

Host Bill Hemmer said he was told up until yesterday there were 44 people on the terror watch list who crossed into the country from the southern border.

When asked whether the U.S. can account for those 44 people, the congressman said, “No.

“There’s one example. Someone crossed -- came across, and they realized after he came across that he was on a terror watch list, and it took them two weeks for some unexplained reason for them to go and arrest him when he they found him in Florida. So it just goes to show you that they do not have operational control,” Katko said.

“They do not have a handle on the people coming across, and they’re really flirting with fire, and God forbid something bad happens. That’s too late then to say, I told you so. We want to say I told you so now, and stop this nonsense, and I just hope the administration will come to its senses, but they seem hell bent on wanting to keep an open border, and they’re really putting the American people in danger as a result,” he said.