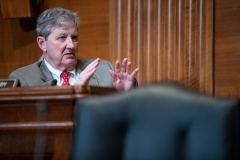 (CNSNews.com) – Sen. John Kennedy (R-La.) said Monday that getting rid of the Senate filibuster “would be like giving whiskey and car keys to a teenage boy.”

“Number one, the Biden administration's effort to get rid of the 60-vote threshold of the United States Senate is not about a Senate that that doesn't work. It is about a woke agenda that doesn't sell. Getting rid of the 60 vote threshold in the Senate, in my judgment, would be like giving whiskey and car keys to a teenage boy,” he told Fox News’s “Hannity.”

“Now President Biden is trying to change the subject by talking about race, and he is mismanaging that. America is not perfect. Americans know that, but they also know that we are good. Black lives have mattered to most Americans for a long time,” Kennedy said.

“The truth is most Americans don't think that much about race. They think about character. They understand that souls have no color. Most Americans understand that to a bear, we all taste like chicken, and I am very proud of the racial progress that we’ve made in America, and President Biden should be too, and I feel very strongly about this issue,” the senator said.

Kennedy said that he trusts the American people, “and the American people may be poorer since the Biden administration took over, but they are not stupid, and I think that most of them are sitting there thinking, you know, Republicans aren’t perfect, but the other side’s now crazy.

“And I don’t think they support President Biden’s radical woke agenda, and I think they're going to speak very loudly this November, just as they spoke in New Jersey and in Virginia,” he said.