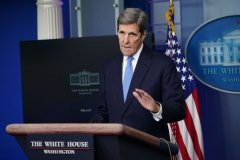 Special Presidential Envoy for Climate John Kerry speaks at a briefing on climate policy in the Brady Briefing Room of the White House in Washington, DC on January 27, 2021. (Photo by MANDEL NGAN/AFP via Getty Images)

(CNSNews.com) – Special Presidential Envoy for Climate John Kerry, who once served as secretary of state for the Obama administration, said Wednesday that oil and gas industry workers who are laid off because of President Joe Biden’s climate change initiatives can look forward to working in the solar industry.

Speaking at the White House press briefing, Kerry was asked what he would say to those oil and gas industry workers whose takeaway from the administration’s climate change policy is that they’re losing their livelihood, especially those who President Donald Trump struck a chord with when he said that he would save their jobs.

When asked whether he’s putting oil industry executives on notice, Kerry said, “We didn't come here to put anyone on notice except to the seriousness of President Biden’s intent to do what needs to be done to deal with this crisis, and it is a crisis.

“With respect to those workers, no two people are more - in this room - are concerned about it, than the president of the United States has expressed in every comment he has made about climate, the need to grow the new jobs that pay better, that are cleaner. You know, you look at the consequences of black lung for a miner, for instance and measure that against the fastest-growing job in the United States before COVID was solar power technician,” he said.

“The same people can do those jobs, but the choice of doing the solar power one now is a better choice. Similarly, you have the second fastest-growing job, pre-COVID was a wind turbine technician. This is happening now,” Kerry said, adding that “75 percent, 70 percent of all of the electricity that has come online in the United States in the last few years came from renewables.”

“Not, you know, coal plants have been closing over the last 20 years, so, what President Biden wants to do is make sure those folks have better choices, that they have alternatives, that they could be that people who go to work to make the solar panels, that We are making them here at home,” he said.

“That is going to be a particular focus of the Build Back Better agenda, and I think that, unfortunately, workers have been fed a false narrative. No surprise, right? For the last few years. They’ve been fed that notion that somehow, dealing with the climate is coming at their expense. No, it’s not. What’s happening to them is happening because of other market forces already taking place,” Kerry said.

“And what the financiers, the big banks, the asset managers, private investors, venture capital, they’re all discovering is there’s a lot of money to be made in the creation of these new jobs in these sectors. So whether it’s green hydrogen that is going to come, whether it is geothermal heat, whatever it is going to be, those are jobs,” he said.

“The same worker who works in South Carolina today putting together a BMW, which happens to be made there, and is currently an internal combustion engine can put together a car, but it’s electric. So this is not a choice between having jobs, having good jobs, having the quality of life. Quality of life will be better when Gina has put her team together that produces choices for us that are healthier, less cancer, cleaner air,” Kerry added.

“The greatest cost to America, the greatest cause of children being hospitalized every summer in the United States - we spend $55 billion a year on it – is environmentally induced asthma. That will change as we begin to reign in what we used to call pollution in this country because it is pollution, and I think that workers are going to see that with the efforts of the Biden administration, they’re going to have a much better set of choices, and frankly, it will create more jobs rather than stuck where we were,” he said.

Let me just add by pointing out a couple of things in the executive order that I want to just call to your attention. We talked about the civilian conservation corps. That is an opportunity to put younger people into work in vitally important efforts, but if you look at this, it also has set up a task force that is looking at these coal communities, communities that are really reliant on their energy, utility, and it talks about how do we revitalize those economies.

And it talks about how we can put people to work using the skills they currently have where they are to start looking at those old, abandoned oil and gas wells that are spewing out methane or all of the coal mines that haven't been properly closed that are doing the same that has great impact on climate but also will keep an opportunity for those individual workers to have work in their own community.

We are not going to ask people to go from the middle of Ohio or Pennsylvania and ship out to the coast to have solar jobs. You know solar jobs will be everywhere, but we need to put people to work in their own communities. That's where their home is. That's where their vision is. So we’re creatively looking at those opportunities investment so we can get people understanding we're not trying to take away jobs.

Remember when we say climate change, eventually people are going to think jobs just like president Biden when he hears the word climate change. So we'll do everything we can to recognize that revitalization is necessary in these communities, to find creative ways to put them to work, and then we’re gonna do exactly what Secretary Kerry says and start investing in new technologies and new manufacturing.

That includes the large manufacturing like cement and steel. That's work that we should be doing here. That's work that inevitably is going to be necessary to rebuild our infrastructure which is also one of the biggest opportunities we have for job growth moving forward.