Kirby: ‘The Military Mission Is Over,’ But We Won’t Turn a Blind Eye to Getting Americans Home 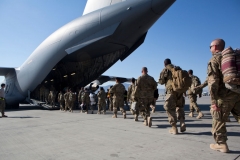 U.S. Army soldiers walk to their C-17 cargo plane for departure May 11, 2013 at Bagram Air Base, Afghanistan. U.S. soldiers and marines are part of the NATO troop withdrawal from Afghanistan, to be completed by the end of 2014. (Photo by Robert Nickelsberg/Getty Images)

(CNSNews.com) - Pentagon Press Secretary John Kirby said Tuesday that even the military mission in Afghanistan is over, the United States will not “turn a blind eye” to getting Americans home.

“The military mission is over, Bill. We are no longer on the ground in Afghanistan to facilitate that kind of safe passage, but that doesn't mean the administration or the government is going to turn a blind eye trying to help them get home, and it’s not unlike we do in other countries around the world when we have Americans that are stranded or need help getting out,” Kirby told Fox News’s “America’s Newsroom.”

“We have a lot of tools available to us to help facilitate that passage, and we’re gonna be focused on that. I would remind that 6,000 did get out, and 123,000 total, a vast majority, were Afghans, Afghans in need, Afghan allies of ours, our interpreters and translators. There was an enormous effort to make as much as we could of the time we had,” he said.

Host Bill Hemmer pointed out that according to the State Department, there are at least 100 Americans who did not get out of Afghanistan.

When asked why, Kirby said, “Well, there’s a lot of reasons why, Bill. There was some -- a lot of efforts trying to contact them, trying to get in touch with them, trying to help marshall them in. Some people didn't want to make decisions until the endgame.

“I don't know the case with each and every one of these 100 or so that are left, but what I can tell you is that as a government, we're gonna continue to make every effort we can to help them find safe passage,” he said.

As CNSNews.com reported, the evacuation mission ended at 3:29 eastern time on Monday – a minute before midnight in Kabul.