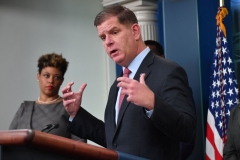 Secretary of Labor Marty Walsh speaks to reporters in the James S Brady Press Briefing Room of the White House in Washington, DC, on May 16, 2022. (Photo by NICHOLAS KAMM/AFP via Getty Images)

(CNSNews.com) - Labor Secretary Marty Walsh said Friday that if the legal immigration system is not addressed, it could lead to an economic crisis.

MSNBC’s Jose Diaz-Balart said that the immigration system is “disastrous,” and “if you are trying to legally immigrate to the United States, get ready to not ever get the opportunity to do so. You may die waiting to get your chance at the line.” He asked Walsh why it’s so difficult to fix the legal immigration problem.

“Because I think it's become a partisan issue and it shouldn't be a partisan issue. I talk to businesses all the time that maybe lean Republican, and I say to them, ‘Where are you on immigration. They're all like we need to fix the system. Then talk to your constituents. Talk to your elected officials that you work for, that work for you on your behalf,’” Walsh told MSNBC’s “Jose Diaz-Balart Reports.”

“And I think that— I'll give you one other example that I find baffling is, in our American university system in this country, we have immigrants that come to this country to get educated. They pay the full boat. They don't get any breaks. They don't get scholarships. They don’t get Pell grants,” the labor secretary said.

“They pay the full amount of money to go to college in America, and then when they graduate, only a small portion can stay because of the immigration system, the way it is. So any other country in the world, if they educated Americans, they’d want to keep them in their country because of the brainpower, but yet, here in America we tell them to leave,” he said.

“It's become more than a border issue. It's an economic issue, and I think that we have to do — maybe I have to do, we all have to do a better job of explaining that to people of what's at stake right now in front of us,” he said.

Diaz-Balart pointed out that the number of U.S. job openings fell in June even though there are nearly two jobs for every unemployed person, and the number of first-time unemployment claims continues to inch up.” He asked how that squares with the latest jobs numbers.

“I think at some point we're going to have to think about where do we find workers to fill the jobs that are open in America, that American companies are going to need to have workers in, in the long term, and quite honestly, I've been a proponent, along with the president, of looking at the immigration system and fixing the immigration system,” Walsh said.

“There's a bill that's up in the Senate right now, Immigration Reform Act, that this should not be a partisan bill. This should be a bipartisan bill,” the labor secretary said.

“We could do so much with this by creating more pathways to employment so companies in America can have employees, and we can also deal with immigration at the borders by looking at a law like this and fixing the challenges that we have as a country, and quite honestly, we've had under past administrations -- this is not just under the Biden administration. This also happened under the last administration as well,” he added.

On July’s unemployment numbers, Walsh said, “Well, certainly it's a good, strong month. When you look at the overall picture from the day President Biden took office until today, all the jobs that were lost at the beginning days of the pandemic and throughout the pandemic have been gained.

The president is going to sign into law next week the CHIPS bill, which is going to allow us the opportunity to do more manufacturing of semiconductors and microchips here in the United States of America, and that will in the long-term help us with inflationary pressures and be less dependent on foreign imports.

We're also seeing gains in education, particularly around elementary and public schooling, education as far as people hiring. This time last year we didn't see the numbers as high as this year, but this time last year, remember, we were in a very different place. We were dealing with the Delta variant.

I think a lot of schools are concerned about if they’re going to open. This year, they were able to open fully in person. They have the supports they need there, so overall, this jobs report is strong, and it shows that there are some signs in this economy that are still very strong.